LEST WE FORGET: Relight Night Thrasher

Despite having a first class ticket to ride, some of comics best often get left to wonder the platform aimlessly. In Lest We Forget, I pluck a limbo-lingerer from the station and pimp their reason to return. This month, the man whose vision and drive formed the basis for the New Warriors, Dwayne Taylor, Night Thrasher. In Night Thrasher #1 (the series), Dwayne relives his story to a young boy dying in his final moments. This fresh take on retelling an origin is trademark of how writer Fabian Nicieza primarily moulded 'just another armoured character, out for vengeance for the death of his parents' into a man who stepped to the side and forged his own shadow - inspiring others around him to do the same.

As the young head of the Taylor Foundation, Dwayne trained hard, creating the Night Thrasher mantle to battle the effect of street gangs corrupting the futures of tomorrow. Inspired by the only family he ever saw, The Fantastic Four, Dwayne formed The New Warriors and through their adventures, began to realise his own upbringing, guided by a woman named Tai, had all been an elaborate plot for her to acheive infinite power. 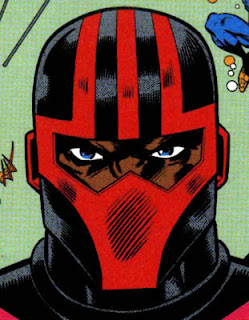 With his new family behind him, Dwayne stopped Tai in the only ways possible and used the Warriors as a method to share his new path with others. This included rejected Avenger Rage, after the loss of his Grandmother and partner/teammate Silhouette, who eventually left him for his half-brother Donyell - the man who would assume his mantle after his death in the prelude to Marvel's Civil War.


HOW I’D BRING THE ORIGINAL NIGHT THRASHER BACK: While Dwayne's return may not seem that key, positive role models free of cheese in comics are always well welcome, and Dwayne's strength to be governed by his own moral compass and not that of others is definitely one of those.

With this as his defining difference, I'd use him to head a relaunch of The Warriors, a 20-something team reuniting to sort out the mess of their legacy and provide support to teens both powered and non, who don't want to simply be divided into a career under the banner of 'X' or 'A', but find their own way.

What do you think? For more Least We Forget candidates, click here.
Posted by IADW at 11:30 pm