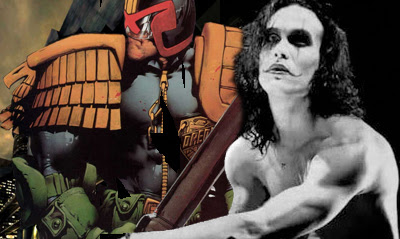 With successful G.I. Joe, Transformers, Teenage Mutant Ninja Turtles and Ghostbusters titles in it's family tree (among others), if there is one comic publisher that knows how to turn a licensed property chick into a rockin' robin, it's IDW Publishing.
This weekend at WonderCon, the indie giant announced plans to hatch a few more starlets, including one of the most famous sci-fi/horror birds of all. Here's how the major hits struck out;
The Rocketeer fires on twin engines in 2012. Mark Waid pens the mini-series The Rocketeer: Cargo of Doom in August, with artist Chris Samnee. Meanwhile his creator also gets his due, with Dave Stevens Covers and Stories set to collect incomplete, rare and popular pieces of Stevens' work in July.


IDW brings the world of MegaCity One stateside this fall, as Judge Dredd returns to the US market in both reprinted and fresh material. Could this mean Strontium Bitch and Slaine aren't far behind?
The Crow fans rejoice! A new series hits in July, written by original movie draft screenplay writer John Shirley. Crow creator, James O'Barr will be among those on variant cover duty, and is also working on his own series, with a release date still to be announced. 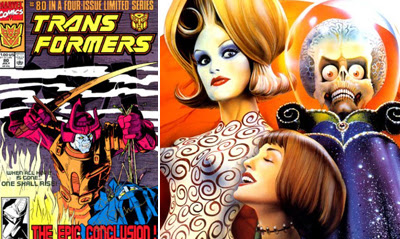 Free Comic Book Day sees Transformers: Regeneration One #80.5 lead into a brand new/old series. One which picks up on the continuity of (and is created by the same creative team as) the final issue of the classic Marvel Transformers series.
Getting its first crossover in any medium this May, Doctor Who teams up with the crew of Star Trek: The Next Generation. With art by J.K. Woodward, the series will feature the Borg and the Cybermen.
If 'Narf! Narf!' means anything to you, watch out this June as Mars Attacks! debuts, with 55 variant covers - one for each of the original Topps trading cards!
So, any take your fancy?
Posted by IADW at 12:51 am