Twice a week, Making A Mark gives an insanely talented artist some IADW brag-space. Today goes to Marco D'Alfonso, a Canadian illustrator whose art crashes not only the multiverses (multiversi?) of DC and Marvel together, in an often humorous collision, but all other areas of pop culture and entertainment too. 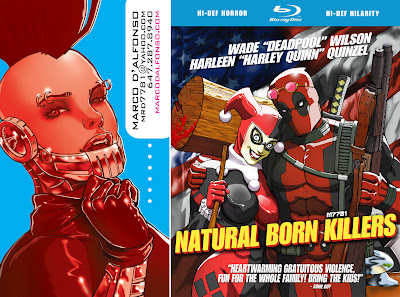 For my money, the female from the former Wildstorm comic line that should've spun out into her own book was Ladytron. I've stated before why she put my gears in drive and needs to return, but seeing Marco use her as his artistic I.D. was an instant sign genius lay ahead.
On the topic of crazy cool females, Harley Quinn and Deadpool make such a natural couple, you almost forget they are from two warring companies. Done for CBR's The Line It Is Drawn, the couple are Natural Born Killers indeed. 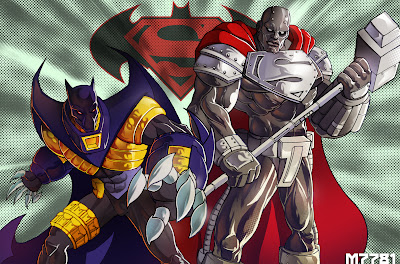 I might be getting old and having amnesia kick in, but I really don't think the 90's weren't as bad for comics as some folks make out they were. Steel and Azrael, the 90's stand-in 'Superman' and 'Batman' respectively, are proof of that. In fact I just might dig out my copy of Knightfall right after I hit 'post'. 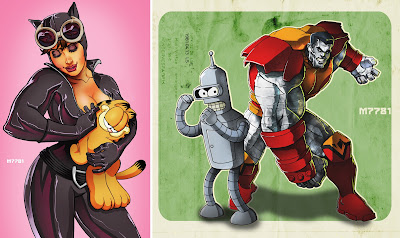 Keeping his knack for wicked multi-franchise tag-team's going, check out Marco's Catwoman and Garfield, not to mention Futurama's Bender and Colossus (Days of Future Past Part Infinity +1?). Garfield's face always says it all!
Marco's portfolio is full of so many more great illustrated gags and showdowns. From Lion-O's kitty litter to the downside of bats in the batcave or Soundwave having cassette tapes in his chest, the Toronto talent shows good art doesn't always have to stay within brands or take itself too seriously. As long as there is a powerhouse behind the pencil, true skill will always shine through.
What do you think?  Sound off below in the comments section or click here for more great Making A Markists. To see more of Marco's marvels, visit his personal website m7781.com, right after the jump.
Posted by IADW at 1:58 am