Twice a week, Making A Mark gives an insanely talented artist some IADW brag-space. Today goes to Mark Beachum, a powerful painter/illustrator whose artistic motto seems to be "life without naughty bits is...less naughterific? [probably doesn't taste good either...]". What does that mean? Simply, Mark draw's comics hottest - a tad closer to the edge than most - creating unbelievable art; 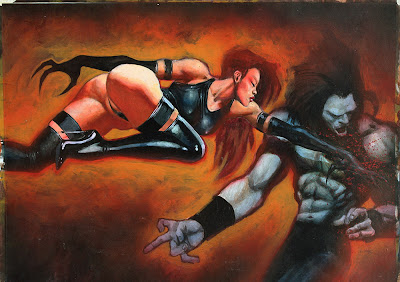 Psylocke vs Lobo? Now that would be a fight! While Mark also claims Nightcrawler is in the mixed media piece, lurking in the shadows, seeing Betsy take on the 'Main Man' would definitely eliminate the foul taste from our mouths after his loss to Wolverine in Marvel vs DC! 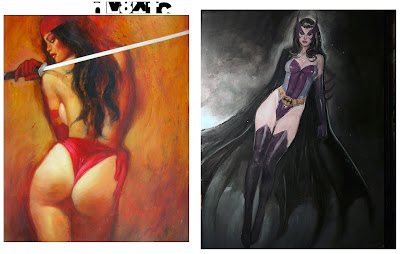 Keeping the Marvel/DC theme going, these two seperate works just fit naturally together - I mean it's Elektra and the Huntress for Pete's sake! These two were born to meet and truly would be a dynamic duo team bridging two universes. Again Mark's sweet atmospheric backgrounds highlight each character, without detracting from either. 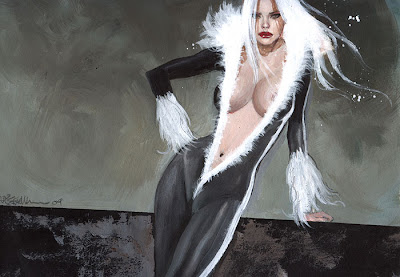 Black Cat's had a sweet run at Marvel lately, especially in the recent Daredevil/Spider-Man crossover. Where Spidey commented he could feel the start of his Super-Villainy approaching when he spied Daredevil locking lips with Felicia Hardy. This Black Cat might be more concerned with keeping things concealed as she leaps around the rooftops. Oh well, it worked for JLo... 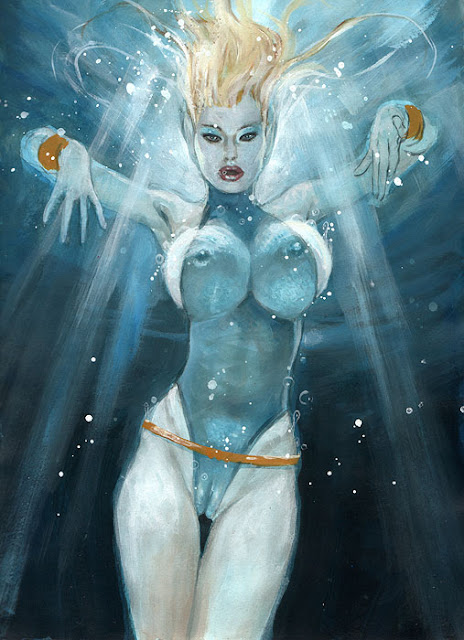 And there's the painting that led me to Mark. An undying fan of Marvel's New Warriors, I realised of all the crew, Namorita was one of the least featured here on IADW - no more! The way Mark captures the light streaming in through the water over Namor's cousin, really fixes your gaze!

What do you think?  Sound off below in the comments section or click here for more great 'Making A Markists'. To see more of Mark's gallery, click this jump. Warning; the pieces promoted here, are some of the tamer images in Mark's online portfolio. Works on the other side might be a little too salty for some viewers.
Posted by IADW at 12:25 pm