Marvel Announce 'Space: Punisher' At WonderCon, Kiefer Could Of Been Robin And More, When It Comes To THE CRUNCH 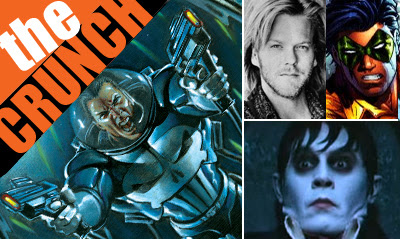 CRUNCH! Tim Burton's Batman movie originally included Robin! Promoting his new TV series Touch, Kiefer Sutherland said; "I’d just finished Stand By Me and Young Guns about the time that Warner Bros. were making the first Batman film with Michael Keaton and I got a call which asked me if I would be interested in playing Robin. I was like: ‘as in Robin with tights? No!’ I didn’t realize they were going to make the coolest movie ever!” Dam - talk about missed opportunity! (Via).

CRUNCH! Sticking with Burton, the creative director has re-teamed with his Catwoman Michelle Pfeiffer and Johnny Depp to create Dark Shadows. The movie where a 1700's playboy turned Vampire - buried-alive - rises in the 70's, to find the family that now inhabits his manor all have demons of their own. Here's the first trailer;
CRUNCH! Could this be as close to Punisher vs Aliens as we'll ever get? At WonderCon this weekend, Marvel announced Space: Punisher #1 (of 4) for July, by Frank Tieri and legendary Punisher artist Mark Texeira. The out of continuity tale is pitched as a cosmic "Moby Dick" with lots of guest stars and The Hulk as the whale.

CRUNCH! Rob's Aquaman Shrine and Shag's Firestorm Fan are the go-to resources for their respective characters, if not character blogs in general. Their unified podcast Fire and Water had it's 15th issue released this week, so lend it your ears, and catch up on two of DC's biggest recent revivals, right after the jump.
Posted by IADW at 10:00 pm