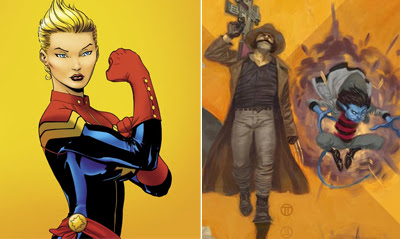 As you and I go about our weekend relaxation, over at WonderCon 2012, Marvel is making sure fans know they're not about to rest on their laurels during Avengers vs X-Men season, with the revelation of two former titles coming back in a whole new way.

Remember my odds on who would take up the teased mantle of the new Captain Marvel? Well it seems my #1 pick, Carol Danvers aka Ms Marvel has pile-driven the competition to take out the role - getting some new threads and a mop-chop to match! Writen by Kelly Sue DeConnick, with the stunning artistic team of Dexter Soy (interiors) and Ed McGuinness (covers), Captain Marvel #1 launches this July.

Taking flight from recent events in Secret Avengers, Captain Marvel will return a female based title to Marvel's offerings, as well as grow the cosmic side of the universe. A side Marvel's Tom Brevoort also teased "There are big, huge massive plans for" so watch out!

The other announcement was of a return for X-Treme X-Men. Don't let the title fool you though, this won't be the return of the jaw-droppingly good series by Chris Claremont and Salvador Larroca, that redefined Rouge and saw the 'death' of Psylocke, but rather a series more down the lines of Marvel's former title Exiles.

Written by Greg Pax and illustrated by Steven Segovia, X-Treme X-Men will centre on Dazzler, as she teams up with the steampunk-ish Emma Frost from "Ghost Box", Howlett and Kid Nightcrawler from Pak's Astonishing X-Men, and others, to defeat the greatest threat yet to all their universes. It too is released this July.
Posted by IADW at 1:28 pm