Splash pages, you gotta love 'em. A blank canvas where the artist can hit you with a large dose of illustrated 'wow'. This week, because a website without The West Coast Avengers is no 'Dan's World' at all, here's a splashie from issue #100 drawn by the highly-unsung Dave Ross, moments before Mephisto killed one of the skewered coasters. 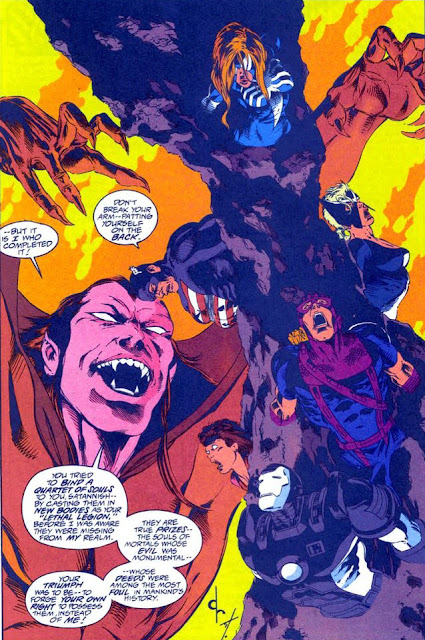 Just look at that line-up! While the east coast team always got the Gods, the west coasters faced equally as epic odds, with a team that usually made Marvel Knights look like the Heralds of Galactus!
So hooked was I on this books rise to fame, what with War Machine joining, solo mini's for Spider-Woman, Hawkeye, U.S. Agent and the Scarlet Witch, plus a crossover with the X-Men, news the series would end at AWC #102 knocked me for a six.
Even though it would relaunch into the equally addictive Force Works (back in the days where cancelling and rebooting was still a rare thing), I still wish I could have had my cake and ate it too, by seeing what Ross and writer Roy Thomas had planned for the future of my favourite westies.
For more great splash-pages, click here.
Posted by IADW at 12:21 am