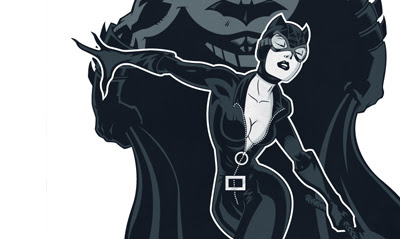 Welcome to the latest instalment of On The Five. Here, armed with five easily digestible questions, I chat to comic / illustration stars and fans about their passion, and what motivational 'play it forward' tips they can pass on to folks like you and I.

Last turn at bat went to the Australian based Marcelo Baez, but today I'm back across the Pacific Ocean to shoot the breeze with Californian graphic designer/illustrator Dennis Salvatier. A previous Making A Mark feature artist, I felt On The Five was a good opportunity to go behind the man that runs one of the best graphic design websites around; The Tanoshiboy Chronicles, and get a dose of his current perspective.
IADW) Let's do a DC style Year One: Dennis Salvatier - what first inspired you to pick up a pencil and turn to illustration, and what made that work so impressive?

Dennis Salvatier (DS): If I recall correctly, it was either Bugs Bunny or Christopher Reeve’s Superman. I just remember really loving Bugs Bunny because he was so clever and funny. But I will never forget the time I saw that scene in Superman the movie, when Superman catches Lois and the helicopter, revealing himself to the world.
My imagination was captured by anything animated and four-color, and those things led me to start drawing on napkins and my coloring books.
IADW) Your talents in illustration and marketing lead to you found Salvatier Studios, an award-winning design studio in Southern Cal. How do you feel your skills as an illustrator affect your success and perspective on design?

DS: That’s funny, because I usually get asked the question in reverse. I think if you look at my web, print and branding work, you’ll see how much my illustration side influences my design choices. It’s just more fun for me to look at things as illustrative challenges because I get to start with a pencil. Those early sketches are the most important step of my design process. That’s where the groundwork is laid. 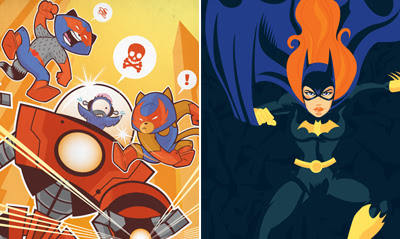 IADW) You had some brilliant comments on the rebrand of DC Comics, pointing out that if you have to explain why a design is designed that way, the design hasn't done it's job. Putting that into a larger scope for the moment, how do you feel comic publishers are currently marketing themselves? Who do you think is the brand/industry champion?

DS: Well, thank you, first of all. I think Marvel is the champ, and it all comes down to consistency and risk-taking. If you look at their movies as marketing media, they have clearly gained a larger audience outside of the fanboy campsite and brought that audience into the comic fold.
They’ve always been more consistent and willing to take risks that pay off. Take for example their paperback initiative in the early 2000’s. That alone got the Marvel name emblazoned in the public consciousness, by selling their books in bookstore chains at reasonable prices. Additionally, they’ve stuck with the same logo for years and that is so important. DC has had three different logos in 10 years. That sets back brand recognition.
I will say that DC Comics is getting much better about their marketing, and owns the animated department of their overall marketing strategy. But if I were in the DC marketing department, the first question I’d ask is “Why isn’t our flagship character [Superman] the most popular character in the world?”. If they could solve that problem, they would be in a much better place.
IADW) What tip for creating art or creative people do you know that you think others could benefit from?

DS: Relax, take some time off and get some sleep. Many times creatives think it’s best to pull all-nighters. I’m more creative at night because there are less distractions, I get that, but when you’re doing it over and over again it leads to a burnout.
Another bit of advice is that whatever you’re doing during the day, whether you’re a bartender or working as an in-house designer, you should always have personal projects. Those projects will save your creativity, because nothing kills inspiration like designing/ illustrating for money. I’ve always said that the one thing more addictive than heroine is a weekly paycheck.

IADW) You and I have both talked on our sites about pretending to be Superman as a youngster (Dennis here, myself here). As adults, many people comic fans and non, hold Superman as a positive role model. Who is your personal 'Superman' or inspirational figure?

DS: Wow, that’s a great question. I think when it comes to the fictional world, I look to Superman and Spider-Man. 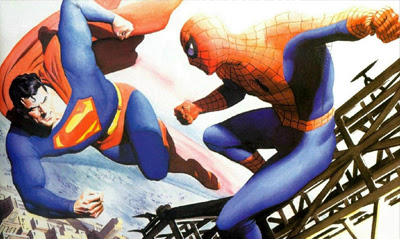 Superman, because he embodies the best of the human spirit so perfectly. He is an immigrant from a dead world and just wants to fit in and be one of us, but he’s so much more. And he’s so incredibly good on top of that (thanks to the good hearts of the Kent’s). So good in fact, that people think he’s outdated and a big blue boyscout. He doesn’t strive to be the best, but fights for what is good and ideal because it’s the right thing to do.
And then there’s good ole’ Spidey. I always looked up to him because we are Peter Parker. We struggle to do what’s right, fail sometimes, all while trying to make ends meet. Those are very human qualities anyone can identify with. The guy has been through so much tragedy but he refuses to give up and just keeps fighting.
But in my life no man, Super or otherwise, can touch my Dad. This guy struggled all his life for everything he ever had. He worked hard and dared to dream in the American dream and after many failures he succeeded. Seeing that as a kid really influenced me and still does to this day. I lost my dad almost six years ago, but his words have stayed with me; especially those on the topic of failure. He told me once that your failures are true failures when we don’t learn from them. It’s all just practice.

And what a fantastic note to end the interview on! A stadium full of soccer fans worth of applause goes to Dennis for his time, effort and energy in doing this interview - it was fully appreciated, and as always great to hear another designer/comic fan's perspective. Hopefully you all got as much out of it as I did, and if you need a second helping, Dennis is serving just that up pretty regularly over on his blog The Tanoshiboy Chronicles. See you there!
(Superman vs Spider-Man by Alex Ross, all other non-cover artwork by Dennis Salvatier)
Posted by IADW at 9:00 pm