In February 2012, not only did DC for the second month in a row lock any competition out of the Top 10 sellers, the exact same half dozen titles, in the exact same order, held onto the Top 6. Marvel's titles held, building towards Avengers vs X-Men, and ended with the House of Ideas win in the number of units sold by 6.45%. In another big move, IDW claimed he position of 'Publisher #3' off Image Comics. 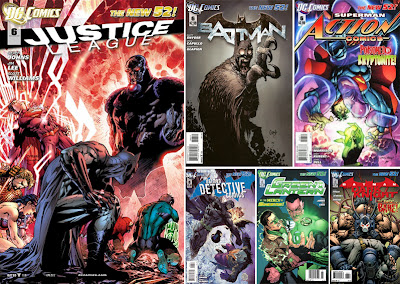 MY THOUGHTS: While Justice League saw the overdue return of The Phantom Stranger, The rest of the Top 10 mimicked last month's too, with Superman at #7, The Flash at #8, but Aquaman leapfrogged Batman and Robin to claim position #9! While Aquaman overtaking a 'Bat' title was once considered a sign of the apocalypse, the second story arc of Aquaman currently kicking off right now has 'hit material' written all over it, so look for that trend to continue.

(Statistics via Diamond Comic Distributors)
Posted by IADW at 4:59 pm