Yip, it's true, I was the one reader who collected Malibu comics Mortal Kombat adaptation series and it's spin-offs. While neither they or the movie Mortal Kombat, aimed as high with the video-games elaborate back-story as they could've, this flick does pretty good considering the game was essentially scripted on seven words; "Fight!", "Flawless victory", "Finish him" and who can forget "Mortal Koommmbbbbaattttt!" 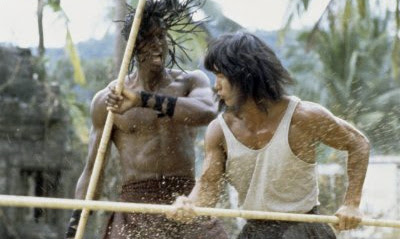 While the techno theme tune by The Immortals that yells the same phrase can still be heard in dance-floors and gym classes of the world, the Mortal Kombat movie franchise (if not the franchise itself) was sadly sunk by the mother (and not in a good way) of all sequels.

Before then, life was good, and this flick had everything the fighting B-graders of old made cool; awesome fight scenes, exotic locations, a blood debt spilt over a code of honour and a dude with four arms. 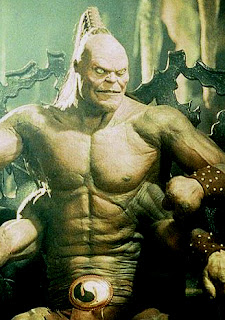 Against Goro and co, Lord Rayden adopts three of Earth's best fighters to protect the planet from the forces of Outworld, via the tournament Mortal Kombat.

One of whom, Liu Kang (Robin Shou), struggles to win for the order of Shao Lin and avenge the death of his brother at the hands of Shang Tsung (the brilliant Cary-Hiroyuki Tagawa). Both named actors carry the majority of the film's weight, where other actors (cough Bridgette Wilson cough) sadly fail - especially as Sonya was originally to be played by Cameron Diaz!
Luckily Talisa Soto raises the female credibility level as Princess Kitana, joining Sonya Blade, Kang and Johnny Cage in their quest. Sticking amazingly close to its source content, the costumes of the allied forces and their opponents; Scorpion, Goro, Sub-Zero and my favourite Kombatant Kano (the late Trevor Goddard) are flawless.
Having sunk $122,195,920 at the global box office, this '95 cult hit manages to do the unthinkable; smoothly portray all nine main characters of the original video game (plus a few others), all in the short space of 101 minutes. While the effects are by todays standards a little dodgy in parts, any film where a four-armed monster gets sucker punched in the nads by a guy doing the splits will always be worth a good watch. 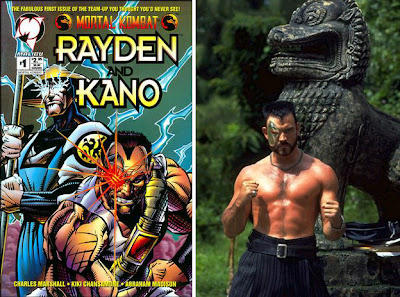 One piece that could've stayed on the cutting-room floor: Like most B-grade Action movies, Mortal Kombat is full of prop errors. The one that manages to pop me out of my suspension of disbelief each and every time? Johnny Cage states Kitana has recently gone down a dusty hallway, then follows, tearing at thick expansive cobwebs as he does so. Did she knit them back together as she passed?