If this is the line at your local comic book store this July, then it's a fair bet they are waiting to get their hands on the latest Star Wars goodies, packed into the July 2012 solicitations of Dark Horse Comics. With more Conan, more Goon and more Buffy, the best three covers from those same solicits roll out like this; 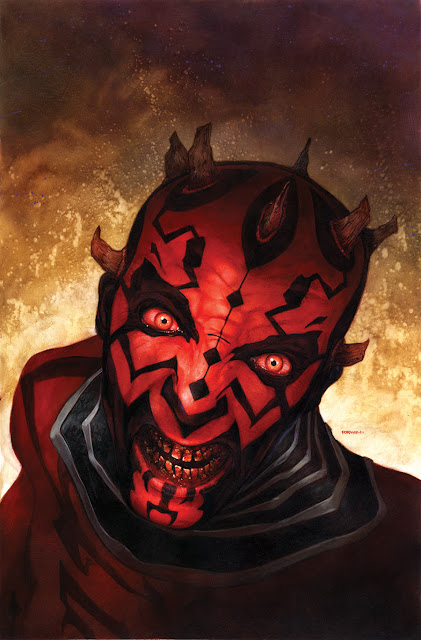 This image is part Insane Clown Posse, part Steve-O from Jackass, and all-round cool. Darth Maul was the highlight of the 'new' Star Wars prequels, for all 15 minutes he was on screen. Like me, if you've always wanted more, this cover will mark your source.

Dark Horse says: Darth Maul lives! By now the galaxy has learned the terrible truth: Sith Lord Darth Maul still lives. Worse, he has joined forces with his brother Savage Opress!
The Jedi are searching for them and, after Maul and Opress cut a murderous swath through the Outer Rim, so is an army of mercenaries hired by a wealthy mine owner.
Darth Maul has a price on his head, and for him there is only one way to deal with such a problem: go directly to the source!
A direct follow-up to the events in the television series The Clone Wars!
CLOSE CONTENDERS: (Click to enlarge) 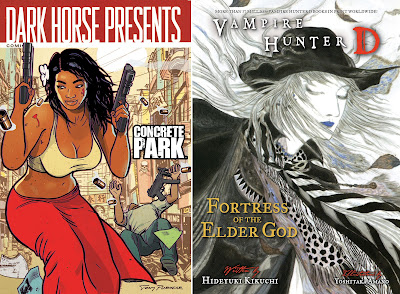 Dark Horse Comics Presents #14 - Tony Puryear With it's pacific island heroine, this dynamic cover reminds me of New Zealand - minus the guns that is!
Vampire Hunter D Vol18 Fortress of The Elder God - Yoshitaka Amano The different line weights, scarves and textures in this cover, make a simple wind-blown character really grab your attention!

What do you think?  Sound off below. For more from other publishers in July 2012 as they become available click here, or to find out the rest of Dark Horse's July line-up, follow the jump!
Posted by IADW at 1:00 pm