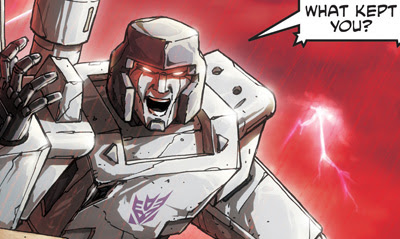 Yip, Megatron is talking to you and why wouldn't he be? In July IDW have more Star Trek/Dr Who crossover-ness, a new Jericho based mini-series, a new Transformers series picking up where Marvel's left off and the return of Hollywood's biggest  gothic cult icon (oh yeah and covers as hot as these three)! 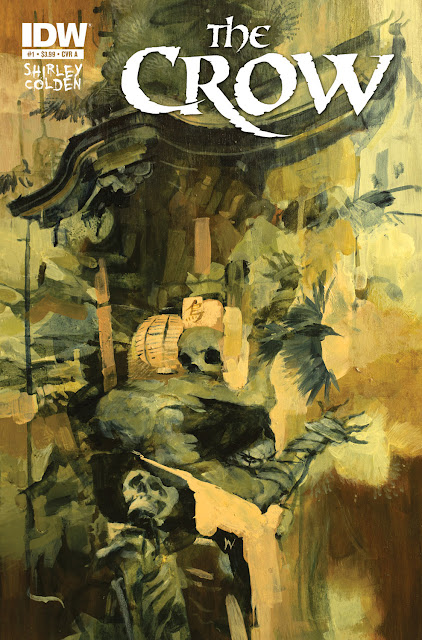 God I hope this book takes itself seriously and does well - with Ashley contributing a cover to the debut issue, it's off to the right start!

IDW says: “Death and Rebirth,” Part 1. THE CROW is reborn—in Tokyo. Can a dark spirit fight for the light? THE CROW has always done just that—striking from the shadows, a kind of shadow himself.

The spirit of the Crow is back, transfiguring Jamie Osterberg, an American studying in Tokyo and deeply in love with his Japanese girlfriend, Yumi… until the love of his life is stolen. The Crow must once more make the wrong thing right—but this time he might have to do it by killing his own true love…. 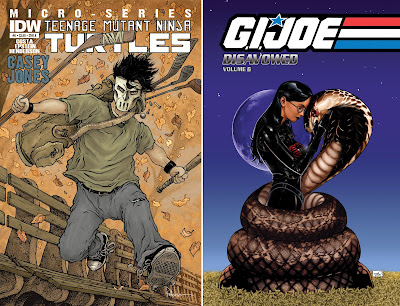 TEENAGE MUTANT NINJA TURTLES MICROSERIES #6: CASEY JONES - David Petersen The attitude and awesomeness that is Casey Jones has always been my favourite character from the TMNT cannon. As David shows here, Pop needs more hockey-stick wielding heroes!
G.I. JOE: DISAVOWED, VOL. 6 - Sharp Bros. 'I'm suffocating'. 'You're constricting me' are obviously traits the Baroness finds comforting in a relationship. Me, I like my space - and partners that are warm blooded. Call me crazy.

What do you think?  Sound off below. For more from other publishers in July 2012 as they become available click here, or to find out the rest of IDW Publishing's July line-up, follow the jump!
Posted by IADW at 11:26 pm