Valiant, it's the entire universe you can actually afford. On that positive note, while other editions of 'Cover Shots' sample the best four of their respective publishers range, Valiant has a total of four planned for their current publishing slate. That means the Valiant Cover Shots will actually be a complete listing, every month - how 'bout that! 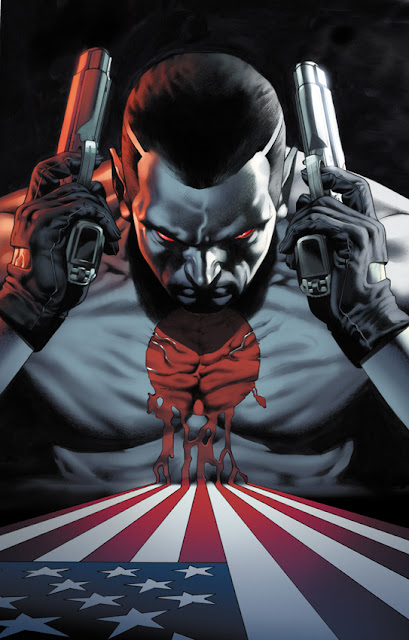 Is this book here yet? This cover has been on and off the wallpaper of my phone twice, and this it's second time on IADW. Valiant are lucky it's not a wallpaper or chances are it'd be plastered over my lounge as well. Just get the book here already!

Valiant says: Your name is Angelo Mortalli. Your brother is trapped behind enemy lines and on the verge of -- no. That's not right. Your name is Raymond Garrison. You've retired from the dangers of the field, but a desperate plea from your oldest friend plunges you into a vicious firefight that -- no. That's not right, either.
You are Bloodshot. You are the shade of gray that freedom requires. The perfect confluence of military necessity and cutting-edge technology. A walking WikiLeaks that is a reservoir of dirty secrets that could set the world on fire. And you've just been captured.
CLOSE CONTENDERS: (Click to enlarge) 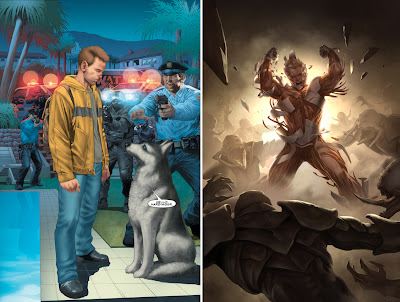 Harbinger #2 - ARTURO LOZZI 'Outside the law. Inside your head. Welcome to the Harbinger Foundation.' This issue's public fight with a S.W.A.T. team could've made a great cover. The decision to opt for a mental convo with a canine - priceless.
X-O Manowar #3 - JELENA KEVIC-DJURDJEVIC 'All that stands between Aric and freedom is a legion of alien soldiers.' Not to mention the man responsible for his capture. On this cover Eric is really powering up to let all those opposed to him have it!

What do you think?  Sound off below. For more from other publishers in July 2012 as they become available click here, or for more details on Valiant in July click the jump!
Posted by IADW at 1:42 am