Like Lord of The Rings did for Peter Jackson, The Avengers will do for Joss Whedon. For with this movie, he has written the screenplay and directed and delivered a film that defines the term 'blockbuster'.

Epitomising the 'united few against the individually unbeatable' concept of it's comic roots, the current generation will reference the impact of seeing The Avengers movie, in the same way mine do Superman. It is truly sensational. Oh, and Avengers has Hulk vs Loki. 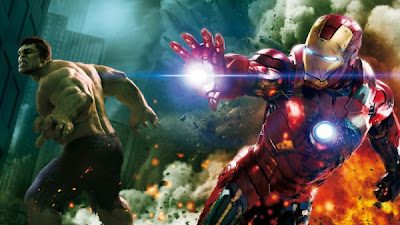 How is it one movie can have one half of your mind laughing at the humour, amazed at the plot twists and gob-smacked at the battle scenes, while the other half bangs on the cerebral ground screaming "This is how the comics should be!"?

As Loki's plan to have humanity assume a more 'natural state' beneath his heel takes shape, so to do the forces that oppose him. In a stroke of genius they don't all join the fray at once, but rather in a drip-feed motion that benefits all characters involved. 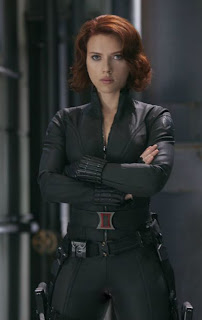 Just like Joss's run on the comic Astonishing X-Men, the friction between the main characters is glorious stuff, making you wonder if they will ever assemble at all. Hulk vs Thor (both times) may be the best slugfest(s) of any film. Cap's defence of Nick Fury's motives, Stark and Banner's common ground and the Black Widow matching wits with Loki - heck, the dialouge and the chemistry of both actors and roles is simply flawless.

As The Helicarrier, officially steals the title of 'Hollywood's coolest vehicle', Robert Downey Jnr remains incredible as the show-stealing Iron Man/Tony Stark. While Pepper also features, and the movie explains how S.H.E.I.L.D. have moved Jane Foster to safety, it doesn't cover why War Machine isn't called in (at least not that I heard the first time round - and believe me there will be a few others).

It's a small thing, but when the alien invasion strikes and the Mjolnir hits the fan, Tony could've really done with Rhodey's firepower, so it does stand out. Oh, and Avengers has Hulk vs Loki. 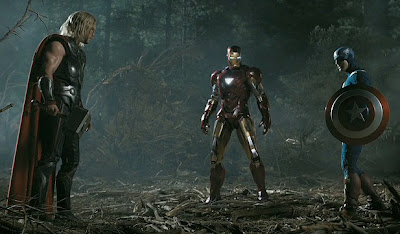 As said forces and serpents reign down upon Manhattan, Avengers conveys an alien invasion like few in film have mustered. Having created a commanding presence in ending Thor's tiff with Iron Man, Chris Evans portrays a Captain America who refuses to give up, despite serious wounds suffered beside an armoured man, a demi-God and a Hulk.

While Black Widow hitches a ride, Banner's 'Hulk controlling' secret is revealed and Hawkeye fires arrows with bulls-eye precision, you realise two key words are missing from the film. In their place, your mind's so busy sceaming over what's infront of you, you're not sure if you actually care. Oh, and Avengers has Hulk vs Loki. 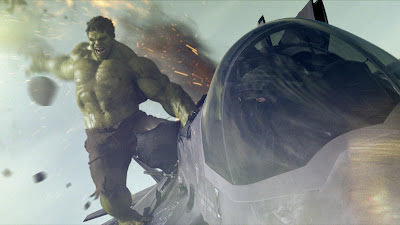 While like all Marvel films, it would have been nice if they could've worked more of a tip of the hat to artist and co-creator Jack Kirby into the proceedings, since Stan Lee again deservedly pops up, what Joss and every single hand employed by this film has done, both as a multi-film climax and individual piece will go down in movie history.

Sure the films that lead to this destination may have had their dips, but as the after credits scene reveals the big bad Avengers 2 is going to tackle, you realise 'Earth's Mightiest debut' doesn't share that fate. Infact as I walked out of the theatre, the guy infront of me instantly turned his mobile on and said "Bro, just watched The Avengers..... FU!#KN' SICK!!!!!" Frankly, I couldn't have said it better myself.