Twice a week, Making A Mark gives an insanely talented artist some IADW brag-space. Today goes to Stephanie Buscema, an American illustrator/painter from New York. With a last name like 'Buscema' you know illustration runs deep in her veins, so to you'll find, does a deep appreciation of all those great drawing styles of times gone by. 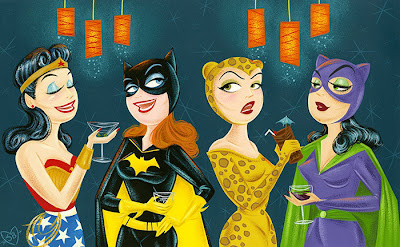 It's an age old question - 'Best females in comics, Marvel or DC?' Here the leading ladies of the latter enjoy an after work drink, good talking about evil and vica versa. Wonder Woman and Batgirl are one thing but Cheetah and Catwoman are a welcome trip down memory lane. 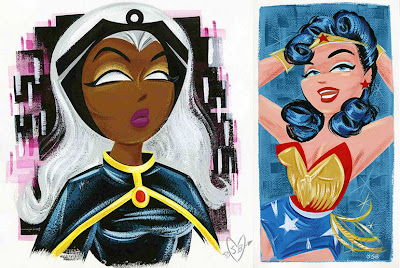 Storm and Wonder Woman above do highlight many of those influences, especially the Golden books style - and even the original opening sequence to the classic sitcom Bewitched. 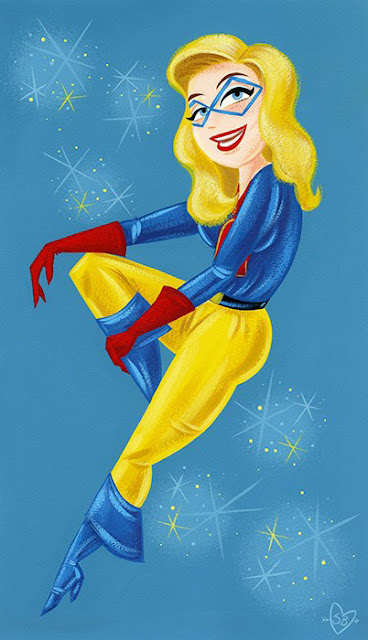 I chose Liberty Belle for the hero piece of the post for two reasons. One; it is just flat out cool, and two; I think the character is one of the most underused yet iconic characters in the DC library. I first came across the original in JSA: The Golden Age, and now the mantle is now with speedster Jesse Quick, it's still a concept and costume that should never be out of sight (just like most of the Justice Society!)

What do you think?  Sound off below in the comments section or click here for more great Making A Markists. To see more of Stephanie's retro based wonder versions of the Inhumans, Mary Marvel and a whole lot more, visit her website after the jump.
Posted by IADW at 11:54 am