PANEL-BEATER: Comic Of The Month: Saga #1


"Sorry. But "We have a family to think about now" is the rallying cry of losers"

Soak your imagination in something new, something vibrant. A universe where a renegade couple from warring planets, have given birth to a child on the run from forces beset from all sides. Forces like a bounty-hunter with a lie-sniffing cat, a unicorn-horned woman with no tolerance for crass talk and a race of monitor headed people, plotting the downfall of magic minds. Welcome to Saga from Image Comics. 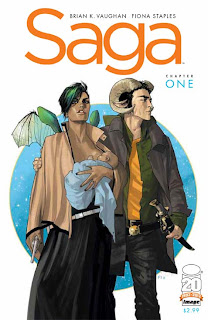 The first thing that strikes you about Saga, is the clean design of it's cover. Plus in a move that would send millions of marketers off a cliff, the back cover is peacefully blank. Second thing? The value; a bumper-sized issue at no extra cost. And no 'two behind the scenes pages you already saw on CBR' kind of "bumper" either, but 44 pages of ad free story. Not that Saga needs it.

Writer Brian K Vaughan not only knows his story, he knows his audience, and here he takes off like a robber's dog. No endless back-story or set-up, this first issue is independent and self-assured, and would be, even at a fraction of it's size. 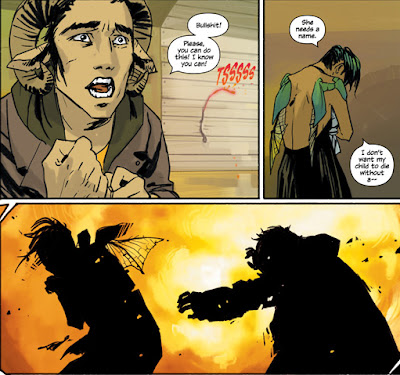 As new found parents Alana and Marko trace the trail of a map that's fallen into their possession, artist Fiona Staples illustrates Brian's trust in the books readership to a tee. Politics, social issues, sex and nudity all raise their head, with Fiona's pen handling each one with just enough detail to tell the story, but not overpower it.

Sure no adult warning scars the cover, but comics were and are best when not speaking down to their readers, and both Image and their opposition offer plenty of more youthfully packaged reads to attract younger eyes.

Heck, Brian and co. even manage a dig in their first issue. As the core couple laugh off the corniness of naming their child 'Hope', the future self of the baby in question (who serves as part narrator for the tale) qwips "It's not like I grow up to become some great war hero or any sort of all-important saviour..." Saviour of the planets Wreath and Landfall perhaps not. Current saviour of my pull list, she certainly is.

Magic Moment: Reed And Ben Have A Beer - Fantastic Four #605 Sure he made Galactus the Herald of Franklin Richards, but that doesn't mean writer Jonathan Hickman can't do up close and personal. After a time trip that reveals The Thing keeps the FF spirit right till his far-flung death, Reed returns to his long-ignored friend and does this; 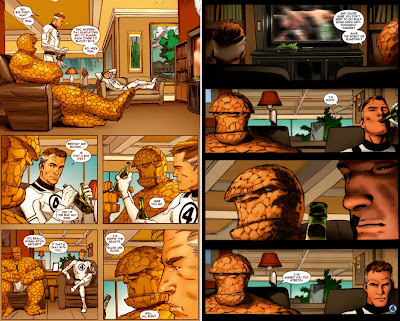 The Best Wordsmith: Brian K Vaughan - Saga #2 I promise this award isn't a yo-yo on a string, but Brian (as he has done in the past) writes the most realistic dialogue I have ever read, period. In two issues, all the main characters are fully fleshed out, with central couple Alana and Marko actually talking 'couple stuff' while on the run.

Best Pencil-Pusher: Fiona Staples - Saga #2 When a writer decides they're going to create all-new worlds, you need an artist who can make those worlds seem 'all-new'. When the writer decides to make the galaxies most feared bounty-hunter The Stalk, an armless woman who is a giant spider from the waist down, well you need Fiona Staples. 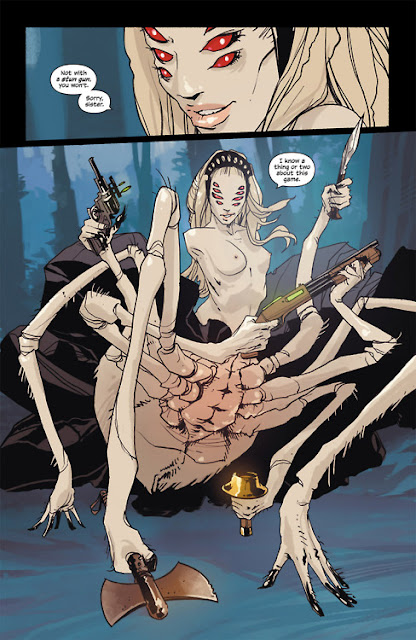