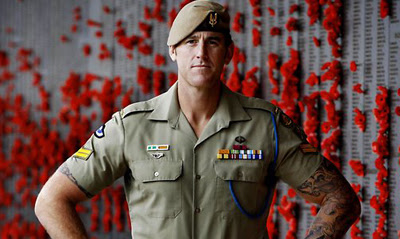 It's move that has been described as something akin to the Spartan soldiers highlighted in the movie adaptation of Frank Miller's 300. In October 2010, in the height of the Afghanistan fighting season, 24 Australian soldiers were pinned down surrounded by multiple points of heavy Taliban machine-gun fire.

One of those trapped by the barrage of bullets, Corporal Ben Roberts-Smith, with no regard for his own welfare, exposed himself to the enemy and charged down their fire, single-handedly taking out three machine-gun points, saving the lives of his entire unit.

While the above act has earned Ben the Victoria Cross, the highest military honour in many Commonwealth countries, and made the 33 year old, 202cm tall giant the most highly-decorated, currently serving soldier of any Commonwealth army, it is not that that makes him the subject of this post.

Rather it is the down-to-earth manner and nobility in which he conducts himself, despite his successes. And in reflection of ANZAC Day (this Wednesday just gone), in which both 'Kiwis' and 'Aussies' remember our fallen war heroes. In particular those who gave their lives to bring down the Ottoman defences of Gallipoli in World War I. 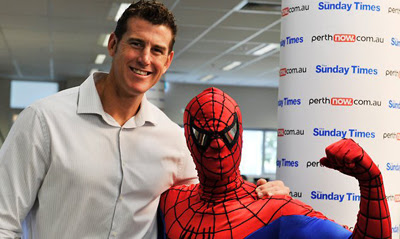 When TV anchors on a main Australian network referenced a 60 Minutes story on Cpl Roberts-Smith by focussing on a scene of the soldier weight-training in a pool with comments like; the soldier was “going to dive to the bottom of the pool to see if his brain was still there” and references to his sexual performance, the network was deluged with complaints and a nation's anger.

While the network apoligised repeatedly as ire increased, Cpl Ben Roberts-Smith never replied even in a mature manner and simply continued to promote his media-generating efforts not as the act of one man, but the act of any soldier fighting for the freedoms he and his teammates in the ANZAC forces continually step out against.

Personally I'm glad there was an outrage against the network. It shows the people of today still have a sense of respect, decency and manners, and that the all to arrogant media networks of this world still have a public that is a higher power to answer too. The public defended it's non-American Idol found hero, as he had defended them.

As the sun rose this week on ANZAC Day in Gallipoli Cove, no one was more justified to read this years The Ode than he. Describing the moment as one "that filled him with pride and emotion" by the magic of YouTube, here it is for you now.

We Shall Remember Them.

For more, on Corporal Ben Roberts-Smith click the jump.
Posted by IADW at 1:00 pm