Being diagnosed with cancer is an incredible climb to overcome, but Sean Swarner once diagnosed with just fourteen days to live has survived cancer twice, and on just one remaining lung, scaled the worlds seven highest summits and competed in the Hawaii Ironman. 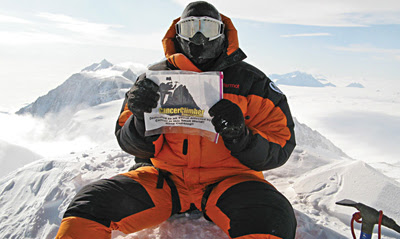 The first cancer survivor to conquer Mt Everest, Sean trained for his treks by exploring Colorado's Mt. Elbert with 100 pounds of rock in his backpack. When he reached the top of the worlds highest peak, he planted a flag which carried the names of 100 supporters whose lives had also been touched by cancer.

A decade on and Sean has climbed the highest peak on each of the seven continents, spreading his story of hope around the globe.
Mt. Kilimanjaro in Africa, Elbrus in Europe, Denali in Alaska, Aconcagua in South America, Kosciuszko here in Australia and Vinson Massif in Antarctica have all fallen beneath Sean's feat of feet. A stark contrast from the boy who was diagnosed with late Stage IV Hodgkin’s Lymphoma at just 13. There is no Stage V.
His dreams of joining the U.S. Olympic Swim Team were replaced by radiation and chemotherapy treatments that saw his weight balloon, complete hair loss, endless nausea and a loss of life and 'friends'. 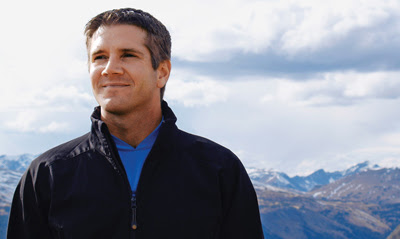 With the cancer spread throughout Swarner’s entire lymphatic system, he was given just three months to live, yet made it to a state of remission nine months, which he relates to a combination of medicine, prayer, humour and family. Not even two years later, a golf ball-sized tumor (Askin’s Sarcoma) was found in his right lung.
More aggressive than the first, the doctors gave him only fourteen days to live. With treatments more painful then the first set to follow, doctors often placed Sean into a medically induced coma so he wouldnt remember the pain.

But Sean survived and better yet in 2001, co-founded the Cancer Climber Association. A non-profit organisation, dedicated to giving cancer patients the tools needed to overcome cancer; the right attitude and a positive outlook on life.

“Keep climbing. Never give up. That’s our motto.”
For more, visit Sean's Cancer Climber Association after the jump.
Posted by IADW at 8:00 pm