The debut of Marvel's ultimate block knocker-off-er-er lived up to it's name in March 2012, with Avengers vs X-Men helping Marvel to not only climb back inside the Top 6, but split it 50/50 with rivals DC. Image Comics reclaimed the spot of 'Publisher #3', while the tied Top 6 was also reflected in Marvel's unit share lead over second place DC, the margin between them narrowing to just 3.85%.
THE TOP 6 SELLING COMICS OF MARCH 2012: 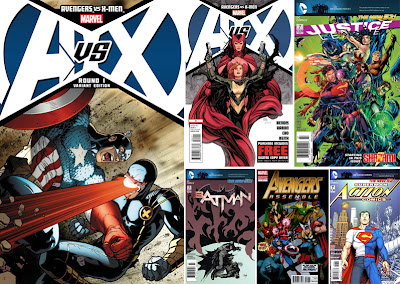 MY THOUGHTS: While it's great seeing both the Avengers and the JLA top the charts, I thought March was going to be the home of two upsets, not one. I really felt AvsX would take the top spot (tick) and Batman would overtake Justice League as DC's #1 (not so tick). With the challenge on to see where Marvel's Avengers vs X-Men #2 will land, maybe Bats will leave his move for April too.

(Statistics via Diamond Comic Distributors)
Posted by IADW at 8:00 pm