GREASE IS THE WORD: Batman Characters Re-imagined As 1950's Rockabillies 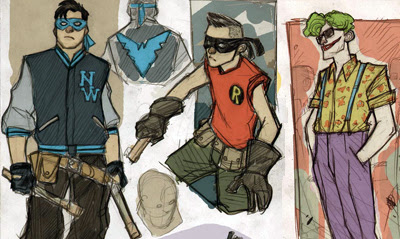 Milkshakes, Chevy cars, comic stores and jukeboxes. Yip, 1950's America was a pretty happening scene. Now Italian artist Denis Medri has taken today's hippest place to be, Gotham City, and flung it's star residents back to the 50's era - reimagined in the style of Rockabilly. As Nightwing, Robin and Joker show above, it doesn't leave them looking like squares either. Here's more proof; 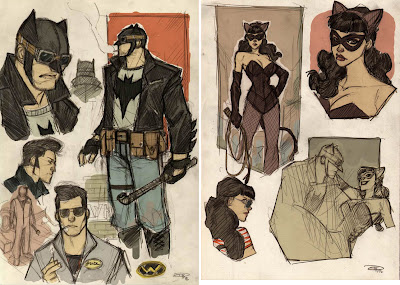 Click to enlarge, and scope out that far-out detail! While Catwoman's redesign isn't too far from some of her previous garb's, Batman actually suits this era pretty swell-like. Don't you miss those alternate reality Elseworlds specials DC used to do? 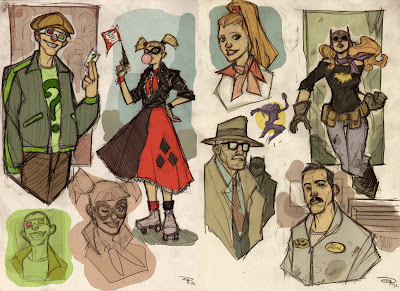 My man the Riddler, Harley Quinn, Batgirl, Commissioner Gordon and even Alfred, get 'updated' to the 50's here. Come to think of it, Batgirl's redesign could actually work  as today's look as well!

What do you think?  To see more of Gotham given the once-over, including Penguin, Bane, Poison Ivy and the all-important Bat-mobile, visit Denis Medri's online gallery after the jump!
Posted by IADW at 11:50 am