It's annoying when something on your bucket list retires before you do. Me, I always wanted to see a space shuttle launch in Florida. Instead last month I had to settle for joining millions around the world in a respectful pause, and watch TV footage of the Enterprise taking a final tribute flight over New York City. 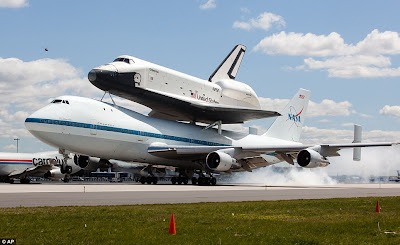 For over 30 years, the NASA space shuttle program has been the stuff of dreams. This Kiwi's included. In fact I think growing up, it was the only down side of being a New Zealander I was aware of; it seemed pretty hard to become an astronaght coming from a country few outsiders seemed to know existed.

But boy did I like my space books, comics and the idea that the possibility existed, let alone what the everyday men and women that stepping out beyound our stratosphere had the potential to see and uncover. Even more so then the space bound fictional heroes the space race has inspired, these folks are all truly heroes. 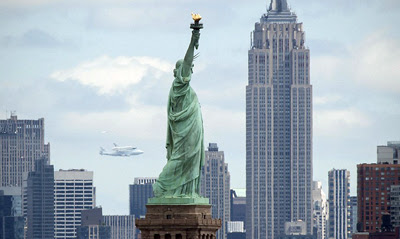 Flying at low-altitude atop a modified 747 Boeing jetliner, Enterprise's final flight soared past other engineering icons such as the Empire State Building and One World Trade Center, marking the end of an era. Originally named the Constitution, a campaign led by Trekkies, persuaded officials to rename The Enterprise after Star Trek's very own flagship vessel.

Enterprise will stay on display at Manhattan's Intrepid Sea, Air and Space Museum. Fellow shuttle Discovery will take Enterprise's former spot at the Smithsonian, Endeavor will rest in Los Angeles and Atlantis will stay at Florida’s Kennedy Space Center.

While NASA's shuttle program ended last summer and it's historic shuttle birds will no longer fly, future generations will still find inspiration in NASA's efforts, with work set to begin on a new generation of spaceships that can carry astronauts to destinations even further afield. Just imagine.
Posted by IADW at 12:09 am