BY ASGARD! Get Your Art And Design Judged By 'Loki' Star Tom Hiddleston! If one man is giving the Magneto actors a run for their money when it comes to best Marvel Box Office Bastard, it's Tom Hiddleston. His scene stealing turn as Loki in both Thor and Avengers is the stuff fanboy dreams are made of, and has definitely put the trickster God back on fan's radar, after a pretty sizeable absence.

So with art judges dubious enough characters, who better for the folks at We Love Fine to bring in to judge their latest drawing comp then Tom himself? To enter, just pick a Marvel rouge, render how you think he or she should look on a t-shirt and send it in for judgement! 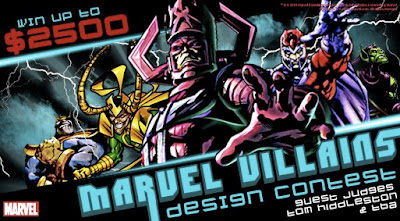 Up to $2,500 is up for grabs, as well as bragging rights that your art was picked by a God himself (well a God during pay cheque hours at least). With a second surprise judge yet to be revealed, you can see full entry details, along with the list of eligible villains for you to chose from, right after the jump. May the baddest entry win.
Posted by IADW at 11:21 pm