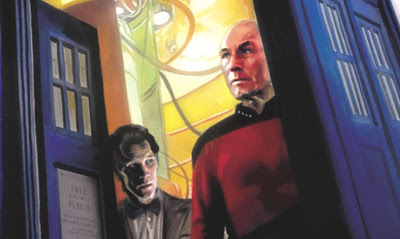 You just never know who is going to walk through the door of IDW Publishing's range of titles. Dr Who meets Star Trek, Transformers, Godzilla, Mars Attacks - heck, it's like the ultimate fancy dress party. In September 2012, these three covers, the best of the solicitation list;

COVER OF THE MONTH: STAR TREK THE NEXT GENERATION: THE HIVE #1 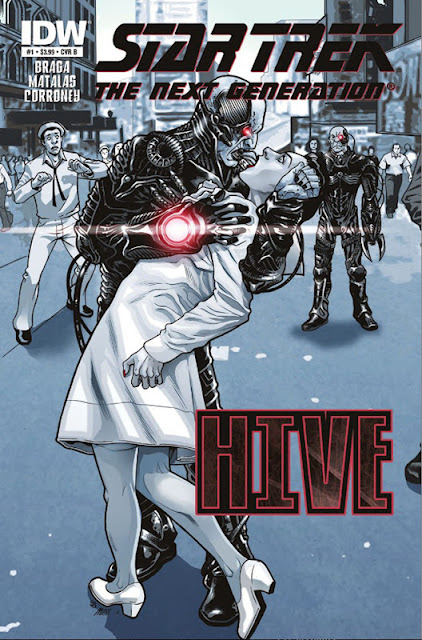 Whoever thought of mixing a famous war-time image with the Borg from Star Trek, is someone in need of a raise! It's even more of an attention grabber than the original!

IDW says: Celebrating the 25th anniversary of Star Trek: The Next Generation! In the distant future the entire galaxy has been completely assimilated by Borg and it's king Locutis! The only hope for the future lies in the past, in the hands of Captain Jean-Luc Picard and the crew of the starship Enterprise -- as Picard faces off against the Borg collective in one final, terrifying and definitive encounter! J. Scott Campbell - G.I. Joe/Danger Girl #3 Last month it was Scarlett, this time it's Destro's squeeze, The Baroness, with no less striking result!
Ken Loh - Snake Eyes And Storm Shadow #17 This guy has a real Kubert feel to his art (and ninjas!). With some of Marvel's best Joe covers being Kubert works that's no small praise!

What do you think?  Sound off below. For more from other publishers in September 2012 as they become available click here, or to find out the rest of IDW's September line-up, follow the jump!
Posted by IADW at 11:55 am