LEST WE FORGET: Excavate Aztek

Despite having a first class ticket to ride, some of comics best miss the train and often get left to aimlessly wonder the platform, all but forgotten. In Lest We Forget, I pluck a limbo-lingerer's need for a comeback. Today, it's DC's Aztek: The Ultimate Man. 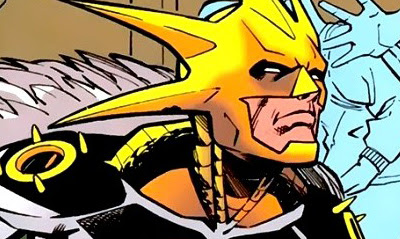 With a sweet handle like 'The Ultimate Man', it's easy to spot Aztek as a love-child of Scottish writers Mark Millar and Grant Morrison. I got hooked on the hero in his title's final issue crossover with Grant's JLA - an issue so good, I scouted out all nine previous issues soon after. While Uno aka Aztek, died amid undeserved weak sales, a new Aztek, in the post 'mainstream Morrison' world wouldn't share the same fate.

WHY HE IS COOL: Past, Present And Future
Aztek as a character, wasn't a full on love letter to comics' Silver Age. Rather he championed the return of imagination and heroes to the industry's tales in a modern way. His character was a hero of past traditions, who questioned the present (often making the reader question the era too), while awaiting the end of tomorrow. 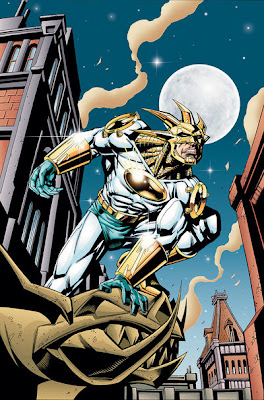 Why does a 'hero' shoot an escaping elderly villain in the back? How has torture become a tactic for bait rather than the intended victim? Uno wanted answers, luckily he had the power to get them.

Handed the mask of power by Quetzalcoatl, the God of Light, the Brotherhood of Q has kept the mask safe throughout the generations. As they transformed into the Q Foundation, the mantle of their corporate champion fell to Uno, after his father was killed for stepping outside the brotherhood's practises.

Adopting the corporate legacy of his people, Uno as Aztek sets out to confront the Shadow God Tezcatlipoca's foretold return to earth. Armed with the helmet's access to the knowledge of his predecessors and an occult suit of armour with massive offensive, strength and flight capabilities, he decides while he waits for the battle ahead, to clean up Vanity City with a new approach to crime; an intelligent one.

HOW I’D KEEP AZTEK FROM BECOMING A RELIC: The Doom Patrol want him. The Outsiders want him. Heck, even The Seven Soldiers want him. But as Aztek's adventures weave him through the non-JLA side of the DCU, Uno soon realises the corporate and mythological aspects of the Q Foundation aren't the complimentary bedfellows once thought. As they begin to rupture and form two warring sides over the fate of the earth, Aztek becomes the only man capable of stopping Tezcatlipoca's return in the most unexpected of forms.
Posted by IADW at 1:00 pm