MOVE OVER DANNY RAND: The Man With The Iron Fists Trailer Restores The Wu-Tang 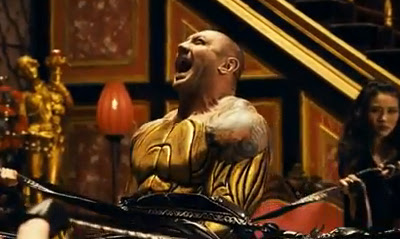 Within the Marvel Universe, Iron Fist is a kung-fu warrior of a secret order that's pretty used to dealing out a bit of black and blue to those who oppress the everyman. In RZA's directorial debut on a Quentin Tarantino film, The Man With The Iron Fists mixes copious amounts of that same kung-fu feeling with 19th Century China, to bring more great over-the-top battles, weapons and martial art action to the big screen. Heck, Wu-Tang Clan is even on soundtrack duties and Kill Bill-er Lucy Liu is even in there too.

So suspend your reality for a few minutes of cool. Check out the IGN released trailer below and see how a man whose fists are actually iron actually brings the pain.

Labels: Can we get Pam Grier in there too, Lucy Liu, Now thats an Iron Man, Quentin Tarantino, RZA, The Man With The Iron Fists, Trailer, Wu-Tang Clan