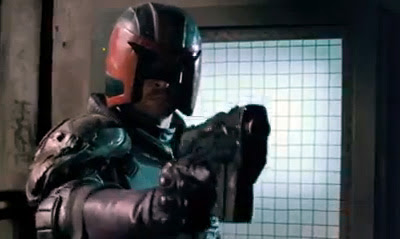 Ever since he hit a decent role in the movie adaptation of DOOM, I've wanted fellow Kiwi lad Karl Urban to get his due. While Pathfinder wasn't quite it and in Star Trek he just needed a bit more exposure, I'm pretty sure Dredd, based on the UK comic phenomenon Judge Dredd will be. What makes me say that? This trailer right here;

Out to stop the spread of the slo-mo drug cartel from Mega-City One, the husky-voiced one-liners show this outing is already better than the last time the Judge's tried to stamp their authority in Hollywood. Penned by Alex Garland (28 Days Later), Lionsgate's next violently bone-crunching pulp hit Dredd will land this September.
Posted by IADW at 11:00 pm