Splash pages, you gotta love 'em. A blank canvas where the artist can hit you with a large dose of illustrated 'wow'. This week, with Batman vs Bane ready to hit movie theatres, I thought I'd post the splashie from the initial storyline that brought the two together, Knightfall. While Bruce Wayne lay crippled by Bane, a new Batman took to the skies in the pages of Batman #500 - his name was Jean-Paul Valley 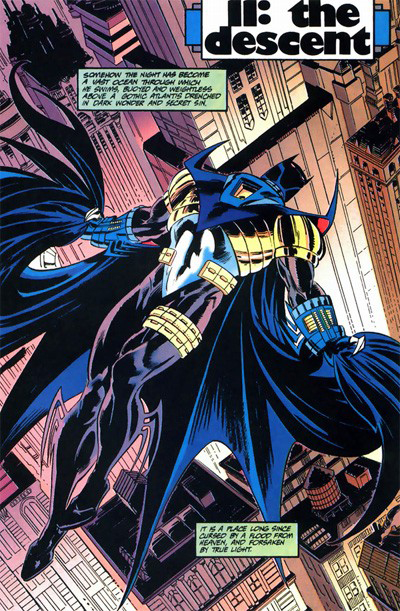 Done by Joe Quesada, with Mike Manley on interiors, this splash-page debut of the new Batman was shocking because DC had actually done it. Actually removed both Bruce Wayne and the infamous, previously thought untouchable bat-suit.

While Jean-Paul didn't seem such a fan of being a creature of the night on first looks with all that gold and those claws, in the initial issues the art team actually made it work.

Will Jean-Paul's Bat-costume appear in The Dark Knight Rises? Probably not. However, Jean Paul himself would be quite a cool, if not unexpected surprise.

For more great splashies, click here.
Posted by IADW at 1:53 am