COMIC OF THE MONTH: WINTER SOLDIER #6
BEST WORDSMITH: ED BRUBAKER
"I'd lecture you about manners... but no one in this country cares about those anymore" 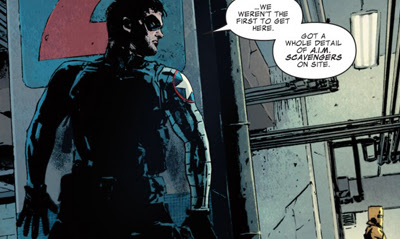 The Winter Soldier is one of the coolest (re)additions to the Marvel line in years, however despite an initial story-arc featuring armed Gorilla soldiers, Dr Doom and fellow F.F. nasty The Red Ghost, the only season this book initially reminded me of was Fall. Now with issue six (the start of a new juicy tale), we get a better 'debut issue' that really shows why Winter deserves some summer lovin'.

Underneath the awesome Steve Epting cover, Bucky Barnes aka The Winter Soldier, tries to track down the remaining Soviet sleeper, a man he himself trained as an agent many years ago. Adding to the catch, it seems the sleeper is already free and has been so for over a decade. 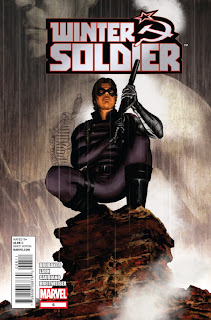 As both Black Widow and S.H.I.E.L.D. help track down the A.W.O.L. Leo Novokov, they are unaware the vagrant they seek has recently read an activation code in the local rag and now has his own plans for both his supposed handler and the man who abandoned him to die, The Winter Soldier.

Time lost heroes and villians, covert spies and a plot with more twists then your average Danish pastry, this is writer Ed Brubaker at his pulpy best. As he dives recaps both Bucky's history within the Marvel Universe and Leo's life and perspective on his 'war', it reminds you of the best issues of his Captain America run. Those issues where your fingers constantly rubbed the back cover, hoping one more page might suddenly unstick itself and give you a few more panels worth of riches.

Michael Lark on art is a right hook few can beat. The best Black Widow currently on paper, the atmospheric style he mastered on Daredevil and detail that would even make George Perez wince are just some of the skills put into and beyond practise here.

Yet if Lark is the right hook, Bettie Breitweiser is the pile-driving, fight-finishing upper-cut. As Leo's tale is told out in a series of flashbacks, this canny colourist limits the colour palette of each to just two or three hues, different to the set before, yet just the right ones to convey the emotion and turmoil currently being revealed. She does such a great job, you actually find yourself wanting to skip to the next flashback, just to see more of her technique!

Make picking up Winter Soldier #6 part of your mission objectives. Brubaker is best when playing in a toybox of this magnitude and as the first shots are fired at the end of this Broken Arrow prologue, you might regret not getting aboard now in the months ahead. Just the type of feeling all true 'first issues' should have.

Being taken for granted is the death of many relationships, so it pays to remember what an awesome job Francis is doing on a monthly basis, in The Flash. This issue concludes the Gorilla City plot with a feral Grodd, cameos from both the Weather Wizard and the Pied Piper, plus another of Manapul's now infamous typographical title pages. Yip, even if he wasn't drawing gorillas in every panel, he's still a class act.

MOMENT OF THE MONTH: PRISONER FALLS IN - AQUAMAN #9 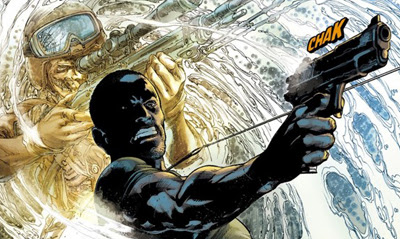 Sure this issue contained a 'big moment' for Aquaman and arch-mega nasty Back Manta, but the show-stealing star of the book is the man Manta hunts throughout it's pages, Prisoner of War. Able to call on the skills of his team like Vixen does animals, this virtual one-man-army throws out the skills of a medic, sniper and more in his hopes for survival, again, amazingly illustrated by Ivan Reis and Joe Prado.

What were your best reads of the month?