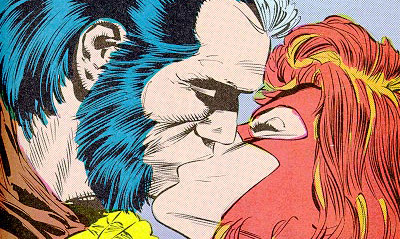 In the 80's I was a kid of two worlds. When it came to movies, I craved folks like Freddy Krueger and Arnie, yet when it came to comics I focused on the brighter likes of Iron Man and Firestorm. Only fitting then, that my first issue of Uncanny X-Men (the title I stayed away from because it seemed too dark) was #242. The issue where the heroic originals, X-Factor, spent half the issue fighting against their semi-demonically possessed, edgy contemporaries, The X-Men. 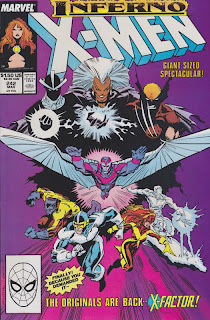 At that point, I knew jack about X-Factor. Beast and Iceman were Defenders, and while I'd seen some X-Men in Secret Wars, many were unknown. I love new characters, but I quickly realised was this sure as hell wasn't The Avengers.

Tony Stark never kissed a girl like Wolverine did Jean on the initial splash page. The rest of the cast thought so to, as it was followed by a double pager of both X-teams watching said smooch, speechless as New York went up in flames.

Writer Chris Claremont shoved every word ever into each and every speech bubble, as savage fights crossed with sacrificial children, and characters embraced their sexiness in a Millar/Daredevil/Elektra kind of way.

Dark, but not that this kid minded. To me it was more of Marvel not talking down to their readers. As the fight over Madelyne Pryor saw Jean's parents turned into demons and sent to kill her, with Cyclops forced to chose which of the two redheads to save, three characters became instant lifelong addictions right here. 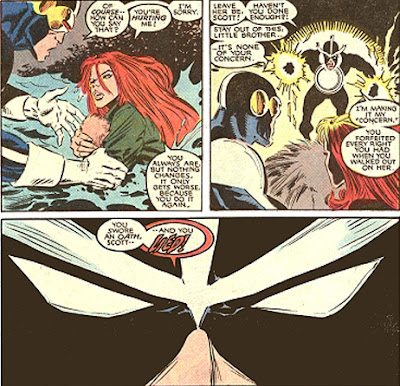 Unlike the older indecisive Scott, Havok was an emotional man of his word. It was one step up on the Hawkeye/Cap dynamic I loved in The Avengers, and yeah, even though he picked the wrong dame (a Goblin Queen to be precise) Havok was a hit with me from the start.

That's not 'Avengers wardrobe', but it sure sent a few vision's into my mind!

The other two characters remain what I consider 'the heart of the X-Men'. As N'astirh is sent to slay all who oppose his Queen, Storm flies high above the team vs team conflict. Using her winds to pull Jean into the air, both heroines deduce each is the real deal. As the two forces of nature embrace over a friendship rekindled, the teams reunite just as N'astirh arrives.

Colossus (already a favourite from Secret Wars) had also kept his distance from the team melee, and has rarely been drawn as well as artist Marc Silvestri renders him here. Stealing back the spotlight, Storm takes the team's assault on N'astirh one step further; 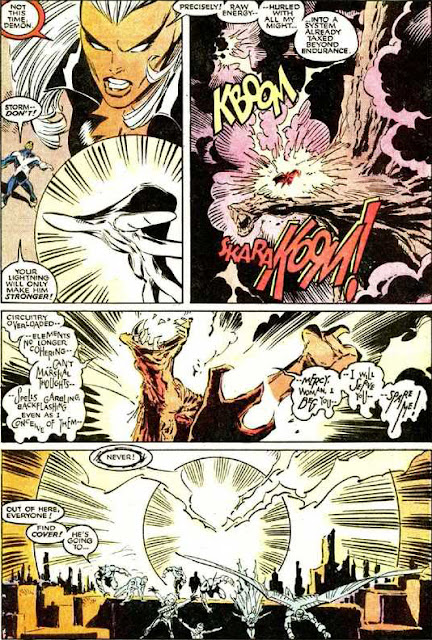 What was your first X-Men comic?