COMICS THAT MADE ME A FAN: Brave And The Bold #194 Trade Heroes And Win! 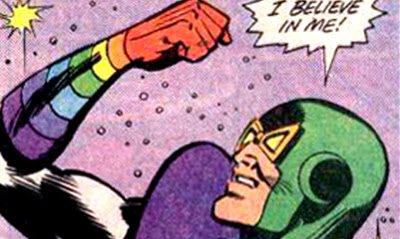 Team-up books were a staple of great comics in the 80's and while their absence is one of the mind-boggling questions of the current comics landscape, few could hold a torch to DC's The Brave and The Bold series. Each issue featured an awesome Bat-mystery and a new battling buddy for the Caped Crusader, different then the one before. With issue #194, Batman and The Flash created the one single comic I can pinpoint as the start of my comic book addiction. 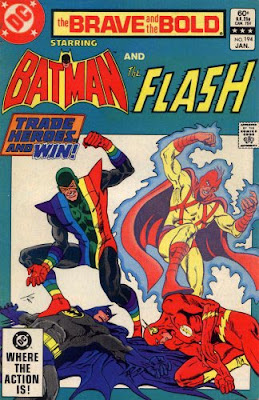 Right from the two iconic logos splashed across the masthead, you knew this was going to be worth the pocket-money. But who were these guys who dared tread on the two best heroes around? One dressed in a rainbow, the other an electric mohawked man. Trade Heroes and Win! - but I'd never seen either of these foes before!

Inside I learnt the Rainbow Raider and Dr Double X were frequent adversaries of The Flash (Barry Allen) and Batman respectively. More than that, both men were so depressed by being routinely whipped, they had sought counselling for their depressions from the same motivational therapist. And that lady had an idea - the one on the cover.

Taking me behind the scenes on how rouges stayed motivated, writer Mike W Barr's script made perfect sense. Yet it wasn't till the Rainbow Raider clashed with Batman my five-year old imagination went 'boom'! 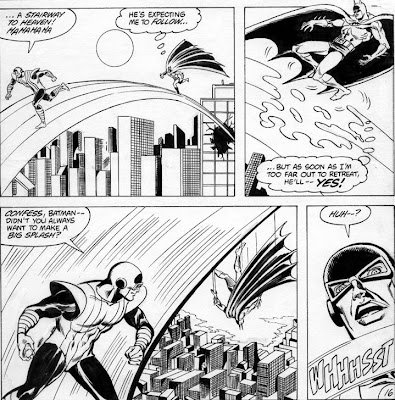 Yip, the Raider escaped out a multi-storey window onto a rainbow bridge he had conjured up. Never one to meet a crook he couldn't catch Bats gave chase, only for the Raider to collapse the bridge and leave Batman with nowhere to go but down. A long way down.

If Jim Aparo's cover had hooked me, this scene drawn by Carmine Infantino reeled me in. The combination of the absurd, the imaginative and heights (which have never been my strong suit) just made me want one thing; more Batman and The Flash!

Unable to find the scene in colour, and my copy too faded and worn to scan legibly, the above is just one of the pages of the issue on show at comicartfans.com for Carmine's work.

Eventually the teamwork of the heroes won out over the castling manoveures of the two villainous villains, and while I won't let on how, in true 80's fashion, the issue even ended with a shared joke... 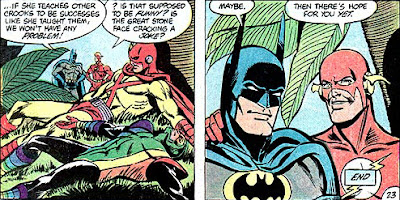 "End" maybe for the issue, but twenty-eight years on the addiction in this reader is still as strong as ever.

What are your thoughts?  Without this issue, there probably wouldn't have been an IADW. What was the first comic that addicted you?
Posted by IADW at 1:00 pm

Labels: Batman, Brave And The Bold, Bring back BnB, Carmine Infantino, Comics That Made Me A Fan, Doctor Double X, Flash, Good Readin', How evil can a rainbow be, Jim Aparo, Mike W Barr, Rainbow Raider