Dynamite Entertainment is one of the newbies to Cover Shots, but when your eclectic range of comic titles includes covers by Alex Ross, Francesco Francavilla and John Cassaday, it's hard not to include you. For Dynamite's October 2012 solicitations, these covers rank best. 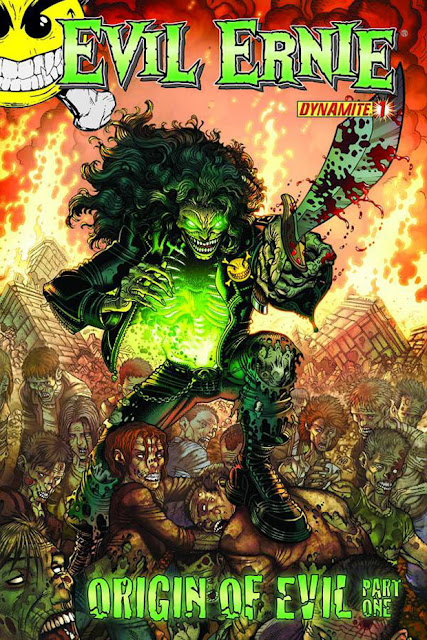 If there was one comics publisher that knew how to create a strong fan community in the 90's other than Marvel, it was Chaos! Comics. Now owners of 99% of that character library bring back the labels biggest bad-boy, slipped in under this awesome cover by current Wolverine and the X-Men artist Nick Bradshaw!

Dynamite says: (Warning book description may not be suitable for anyone affected by the events of Aurora)
ORIGIN OF EVIL PART 1! Ernest Fairchild was a kind and gentle soul...until one day something in him snapped, leading him to one of the most notorious killing sprees in American history. With 665 kills to his name, "Evil Ernie" requires ONE more murder to complete the ritual he started and seal his deal with the Devil. Problem is: he's just been EXECUTED! What led an ordinary boy to become a leather-clad angel of death? How does he wield such blasphemous power? And what is the secret behind his hideous smiley-face button? 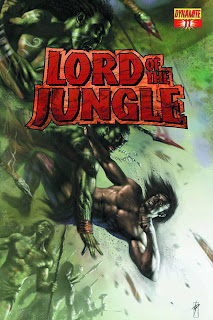 Is Dynamite the new home of classic pulp? This savage cover set in the wild African jungle sure suggest so!

Other Dynamite October 2012 highlights include; Vampirella vs Fluffy one shot pits the pulp icon against 'Fluffy The Vampire Slayer', Pantha #5 starts a crossover with Vampirella and a battle with Dracula, and Alex Ross's work on restoring Flash Gordon is collected in Flash Gordon: Zeitgeist Vol1.

What do you think?  Sound off below. For October 2012 solicits from other publishers as they're released click here, or for more Dynamite, follow the jump!
Posted by IADW at 6:55 pm