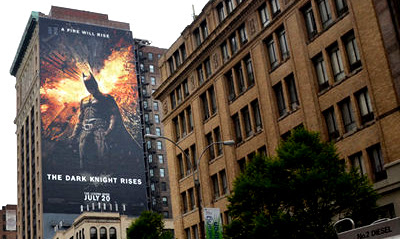 Anyone wonder why Museum staff get paid so much? I mean anyone who's ever been a fan of rock music has hung a poster or two in their time, and getting it right is a pretty simple task; pin in each corner, smooth it out as you go, and maybe a but of blue tack (or chewing gum) in the odd place if bubbles persist. See? Even the Mona Lisa would smile under skilled print hanging hands like that. 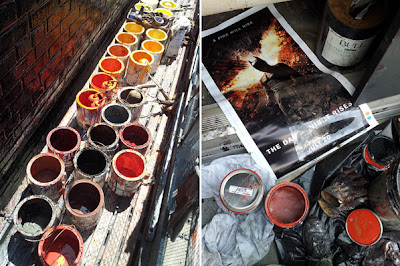 One crew that sure proved their handing craft lately, were the team behind this 150 foot advert for the flick The Dark Knight Rises. Oddly enough located on Park Avenue South, New York, near where Marvel used to make their monthlies, what really stopped traffic wasn't the iconic image, but the fact it was actually a 150 foot painting. Look at the size of those guys in proportion to their art! Four guys doing family depriving sunrise to sunset painting, all in the name of Batman. Not only is it a champion effort, even Cindy Crawford never had it this good.

See more after the jump.
Posted by IADW at 2:58 am

Labels: a long way down if you run out of black, Batman, Comic Movies, giant painting, How much for a Nightwing version, Painting, Poster Design, Street Art, The Dark Knight Rises