Reign of Fire, Terminator Salvation, and yes, The Dark Knight trilogy, Christian Bale sure has played a few heroes in his time. Today, his biggest and most respected role revealed itself, not as a work of any studio or agent, but as an honest man, seeking to help bring comfort to the victims of the Aurora, Colo movie massacre and placing flowers on the community's memorial for their loss. 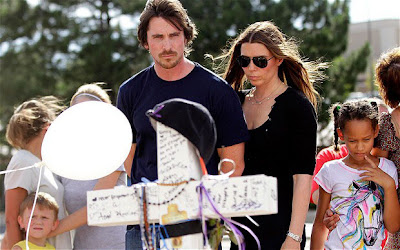 Accompanied by his wife, Sibi Blazic, Bale spent 2 1/2 hours at Aurora's Medical Center, and specifically requested to staff that media not be notified. Unknown if Bale had seen this Facebook petition which had poppped up online last week asking for him to show and spread light in face of the darkness, it is still a remarkable and humbling move for anyone to make. One that hopefully generates even more goodwill to help this community survive and overcome the cowardly and evil act that fell upon it.

One hospitalised victim that definitely felt a positive impact was Carey Rottman, who excitedly Facebooked the below picture of him and the Hollywood heavy-hitter sharing the moment. 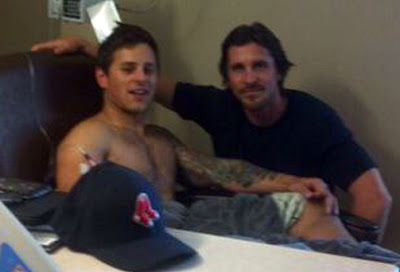