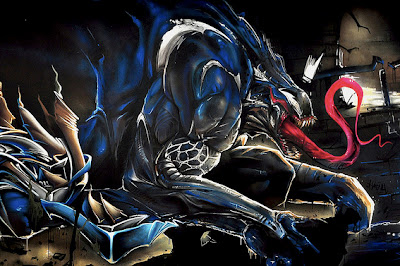 Eddie Brock as Venom is one hell of a Spidey foe, and despite never getting a decent big screen adaptation, sure has a pretty impressive fanbase, myself included. Swap Australia for Hamont, Belgium though and you'll find the lethal protector not only menacing his way through Spider-Man comics, but also on the local graffiti art scene, as captured by Flickr user By Startape Photographe.

Now that redefines mean. For more great shots including the entire wall, visit Startape's gallery after the jump.
Posted by IADW at 11:30 am