'Back in my day you could get four comics for that price!' Yip inflation is a tick, so every month in Trading Post, I'm jumping online or visiting second-hand bookstores with only the price of one modern comic to spend, and reviewing what I find. This month's haul looks like this: 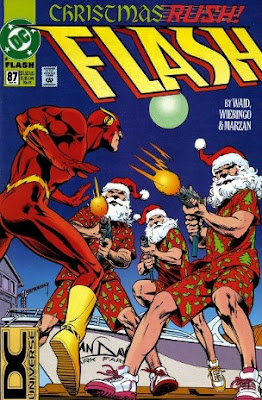 Okay, so I hooked this issue on two points. One it's a hole in my Flash collection I needed filled and two, that cover. It's Flash vs an army of Santas by Alan Davis - what's not to love?

On the inside it's one of those issues writer Mark Waid often conjures to seemingly convey his own pet peeves. This time, people without any Christmas spirit. Toy store burglars, drug dealing Santa cartels, public festive season greed and in-laws, all wrapped up by the interior pencils of the late, great Mike Wieringo.

Oddly the best part of Mark's Flash run was Wally's relationship with girlfriend Linda Park and again those scenes take the eggnog here. Sure the cliff-hanger may not be good-for-goodness-sake enough to lead new readers onto the next issue, but it's still a fair way off being a lump of coal in the stocking. ***** 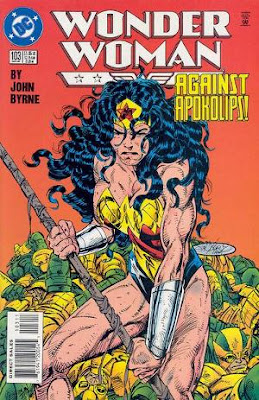 Wonder Woman Vol2 #103
"Darkseid is a God and he will have your respect... in the last moments before he has your soul!"

Before I left New Zealand, I sold my copies of John Byrne's Wonder Woman run, in order to make that collection more portable. Now on the other side of the Tasman I'm grabbing another copy of this issue, to relive Diana unleashing herself against an army of Parademons as Darkseid invades Paradise Island.

Written and drawn by John Byrne, the comics legend brings a bit of a rougher style then his trademark look to these pages, but his plot holds more water than the recent Justice League tale of similar origins.

Straight forward and clear dialogue, pacing, subplots and most of all the scope of the impossible, takes you back to memories of Byrne's classic days on She-Hulk and The Fantastic Four. While Darkseid acts darker than he looks, Wonder Woman shines on regardless. *****
Posted by IADW at 1:00 pm