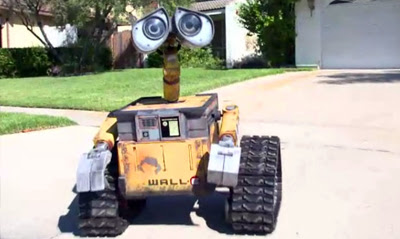 In my day, the movie Short Circuit lead to a mix of kids running round yelling "Number Five alive", and parents reminding said screamers that the bulky robot was "merely fictional". Fast forward more years then I care to count, and Number Five has been replaced in the cute robot stakes by the animated hit-maker WALL-E - and instead of remaining a fictional character, one fan has literally brought him to life.

His name? Mike Senna, and after 3,200 hours of hard-work, mistakes and hard-work to get things right, he created the star of this video right here (don't let the kids see it, a WALL-E will never come off their Christmas wish list!)


The appeal has to be in the puppy-like eyes doesn't it? I'm sure even if Mike's next project is a fully functioning Ultron, as long as he has those eyes, people will still go 'awwww' before he makes his dastardly move!
Posted by IADW at 1:00 pm