Okay so first let's get the obvious out of the way; (potential spoilers). Now onto the juice. Well actually a bit more obvious first. I've made no secret that there's a certain section of DC's universe I've been missing and that I think Brian Azzarello's mythological twist-filled take on Wonder Woman is the best in ohh too long a time.

Well guess how Brian wrote the end of Wonder Woman #12; 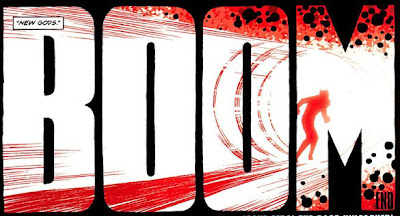 Hopefully there is as much of a difference in quality between how this 'God' is shown here, compared to how his adoptive father was in the early adventures of Justice League, as there currently is between the 'Wonder Woman' in the exact same books.

After the Dog of War is settled, could we see Azzarello on Scott and his wife or the Female Furies? Wonder Woman, if any book is going to rival Saga for the spot of my #1 in 2013, it looks like it's going to be you.
Posted by IADW at 11:32 pm