Urgently need a costume? Sorted; rip your jeans at the knees and cover yourself in green paint - Wham! Instant She-Hulk/Hulk outfit, ready to party! Brazilian Paulo Henrique dos Santos had such an idea, only in the hurry to show off his biceps to the bypassing ladies, he didn't realise the paint he was buying was a special type of military paint, usually reserved for use on ballistic missiles and submarines.

The key there is 'submarines'. If paint is designed to plough the ocean depths, you can bet it won't wash off easy. And you'd be right... 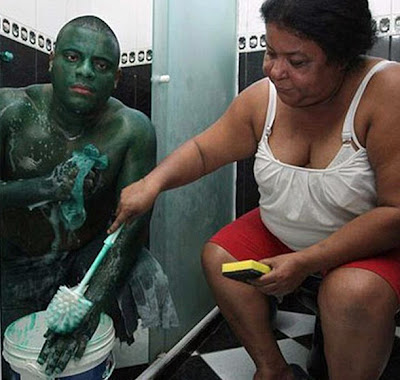 While we ponder how you get your hands on military paint, Paulo ticks the career objective box for all guys who've ever wanted to appear in the media, being scrubbed down with a toilet brush by their mother. Proving it truly isn't easy being green, media even first reported the woman in the photo as Paulo's girlfriend.

Eventually freed by a communal scrubbing from friends and neighbours that lasted over 24 hours, this wasn't Paulo's first time cosplaying as the Hulk. That makes me wonder if this brush with green has put the DJ off imitating the Jade Giant or if he's decided to stick with the ballistic theme and from now on appear as Nova, the Human Rocket.

More pics and details after the jump.
Posted by IADW at 12:30 pm