LEST WE FORGET: Awaken Sleepwalker

Despite having a first class ticket to ride, some of comics best miss the train and often get left to aimlessly wonder the platform, all but forgotten. In Lest We Forget, I pluck a limbo-lingerer's need for a comeback. Today, ironically, it's Marvel's unique and dimensionally lost 90's dream creation; Sleepwalker. 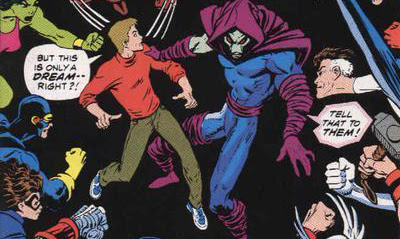 An alien law enforcer, entrapped by the villainous Cobweb in a dimension known as the Mindscape, Sleepwalker has discovered his prison backs onto the minds of every living being. The portal he choses to step through in order to navigate his way home? The one that borders teenager Rick Sheridan's dreams. Meaning when Sheridan slumbers, The Sleepwalker strikes!

WHY HE IS COOL: Reoccurring Nightmares
Sleepwalker held tight to it's toss-and-turn theme. Like the outcast alien it featured, the title's plot, rouges, art and guests made it a distinctive cult book. Rick and his bug-eyed freeloader may have had Spider-Man and Ghost Rider drop in, but also outside 90's picks; Deathlok, Dawkhawk, The Fantastic Four and The Mindless Ones! 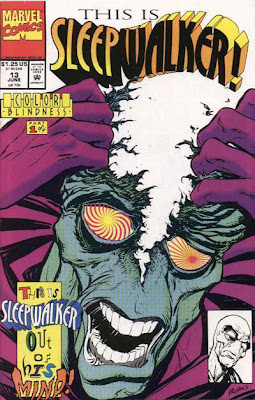 Writer Bob Budiansky conveyed Sleepwalker's law enforcement views on the foreign world around him as effortlessly as fellow co-creator Brett Belvins' did in art. While I preferred it when Sleepy gained a little bulk, Belvins continually experimented with page layout and panel composition. Regardless of whether Rick was awake or asleep, or what dimension the scene was set in, a creative yet surreal feel was key to each and every page.

Then there were his powers. Sleepwalker not only has the usuals like flight, strength and endurance, he embodies a warp vision which allows him to distort material objects into any shape he desires, in an almost Salvador Dali kind of way.

Adding to Sleepwalker's cool was more than Rick's teenage dramas. The eclectic range of foes he found himself up against included the aptly named Cobweb, 8-Ball, (my favourites) The Chain Gang, The Thought Police and more. Each had an early Amazing Spider-Man/Ditko feel, that really gave the book a touch of classic Marvel wackiness.

HOW I’D KEEP SLEEPWALKER FROM BECOMING A MEMORY: To Sleepwalker I'd increase the quirky by having Sleepy materialise from Rick's dreams every other time, and those of random people in need of aid the rest. Not only would this open up even more locations and adversaries (do Doom's henchmen sleep safely?) it also means the only human who is committed to helping the Walker find his home can now actually physically help him, if only he can find him first.
Posted by IADW at 2:52 am