MOMENTS IN COOL: Psylocke Tells Warren Worthington A Tale To Die For

[SPOILERS] Boy it's been a while since I dusted off the old Moments In Cool series, but if I'm going to hop back on the bike, best I do it with two of my favourite forces in comicdom - Psylocke and Archangel. Uncanny X-Force #18 is the issue in question, where the Archangel persona has taken hold of Warren Worthington III's mind, forcing his team-mates to travel to The Age Of Apocalypse to retrieve the one weapon that can prevent him from annihilating all life on Earth.

The one to actually blindside the deranged original X-Man and use it? 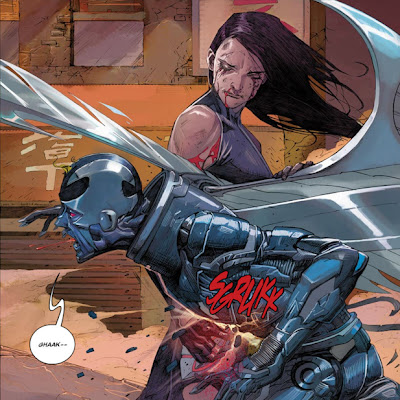 Now in the hands of an average writer, that's where the stunning Dark Angel Saga story-arc would've ended. But this is writer Rick Remender, and if there's greatness hidden in a scene other's might miss, like the telepathic ninja he too often seems to be, Rick will hunt it out.

Drawn in stunning detail, both in backgrounds and body language by Jerome Opena, Psylocke kneels beside her beloved Warren, who is now back in control of his body. Attempting to soothe his fears over his fatal injuries, she places her fingers atop his forehead, whispering "I'm not going to let you die.... Just listen to my voice... Close your eyes. When you wake up..." and then the following pages.

Be warned, the room may get a little dusty as you read forward. It's the mutant power of this scene. But hold tight. It's worth it... 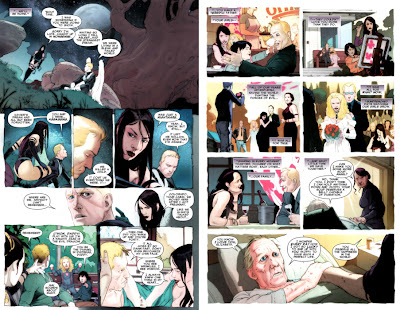 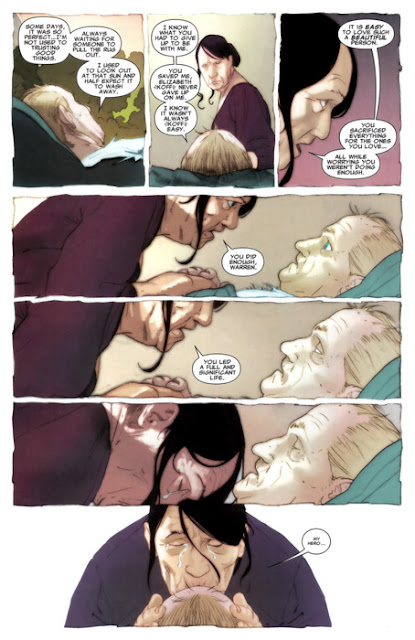 While like the ending of Inception, that last panel doesn't quite reveal whether it is fact or fiction, the very next page does. In fact even though the issue has just four more pages after these, the creative team stab readers through the heart with their own psi-blade in equally stunning ways, another two times before the issue is through.

That my friends is why Uncanny X-Force will go down in X-history as a champion run. For more great Moments In Cool, click the jump!
Posted by IADW at 11:14 pm