As the Thing would say "What a revoltin' development". As Marvel races toward the conclusion of Avengers vs X-Men, creative teams and titles are being revealed for their long-teased relaunch initiative, Marvel NOW. Only the lack of fresh blood on many of the 'new' creative teams, plus plots that don't necessarily warrant a '#1', threaten to re-dub the event Marvel Musical Chairs .

Then today happened. As writer Matt Fraction spoke to USAToday on his plans for a time and space travelling Fantastic Four series, saying; "...one of the best Fantastic Four stories was The Incredibles, and I want to take that back." - the ball connected with the bat even harder when he got to the franchises spin-off title, FF. Just take a look; 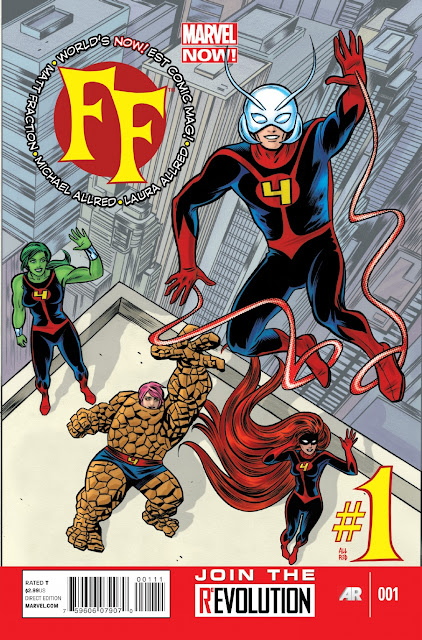 Left to safeguard the planet as the original quartet leaves to embrace all-new self-contained adventures drawn by Mark Bagley, FF features the return of the best She-Hulk of all, Jennifer Walters to the franchise. Picked by The Thing, Jen's teammates include Scott Lang/Ant-Man (picked by Reed (and oddly enough the guy who served on the core team when Reed 'died')), Medusa (Inhuman, former Fearsome Four foe of the FF and picked by Sue), plus the all-new Miss Thing, a celebrity blonde, clad in a Thing suit of armor, who just happens to be the woman Johnny was with before he departs.

'World's Now!est Comic Mag? You Ain't wrong there! That cast makes the book worthy of a grab, let alone Mike Allred's pop-art pencils, playing to the Fantastic Four's retro-roots and giving the title a fresh feel in comparrison to the rest of the Marvel line.

Sure Allred's worked for the House of Ideas before (remember that X-Force do ya?), but here combined with plots like Ant-Man planning to declare war on Doom in the wake of his daughter's death, you suddenly realise 'The World's Greatest Comic Magazine' now has competition - and oddly enough, it's from the same family tree.
Posted by IADW at 12:14 pm