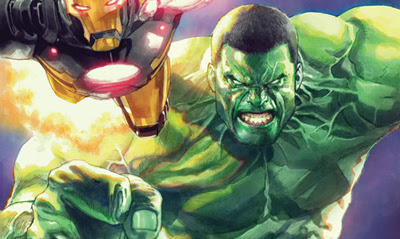 Hot damn - I know he's drawn him before, but for me, Lenil Yu could draw the Hulk for life - he's a natural fit! In December 2012 Marvel tries dropping red onto the majority of the covers in their line. 1) it's Christmas so why the hell not, and 2) it's their brand colour, so it's time to deck the shelves as we head into the 2013. Proving 13 is not yet unlucky just yet, Marvel's best December covers look like these; 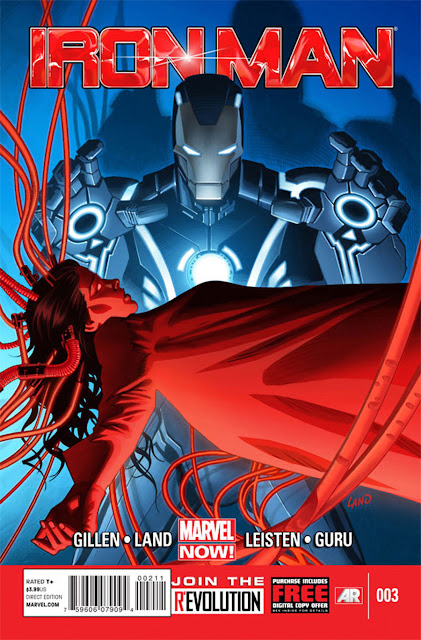 Sure he's doing the same hand gesture most teenage boys do when they see a buxom lass outside the pages of Swimsuit Illustrated, but slight creepiness of an Iron Mammogram aside, Greg Land has created a haunting hi-tech visual that destroys all others with it's contrast!

Marvel says: The new Iron Man stealth armor debuts! The most subtle Iron Man armor of all time! Deep in Columbia the daughter of a cartel boss is “modified” by EXTREMIS. Will villains VIBRO, FIREBRAND and THE LIVING LASER stop Tony from doing what he must to save the world from the deadly nano-virus? 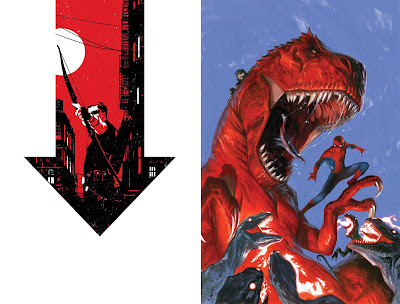 Hawkeye #6 - David Aja Aja is the man when it comes to clean striking covers. Infact the less he draws the more he should be paid (man, that would be a sweet gig)!
Gabriele Dell'Otto - Avenging Spider-Man #15 As if Devil Dinosair hasn't been gone long enough, now he returns rendered by Dell'Otto himself. It's T-Rex times the fun, all for the same wall-crawling price!

What do you think?  Sound off below. For December 2012 solicits from other publishers as they're released click here, or for Marvel's full December line-up, follow the jump!
Posted by IADW at 1:17 am