DAYS OF OUR LIVES: Paul Dini Says 'Happy 20th Harley Quinn' And The Origin Of Her Suit 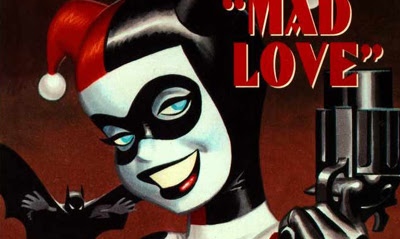 If one character ever went from stable to insane levels of popularity in six seconds, it's Harley Quinn. More than The Joker's sidekick, Dr Harley Quinzel's transformation into the mallet-bearing maven of maddness and merriment made her an independent pop-icon.

Today, just as the infamous cartoon in which she debuted celebrated it's own milestone last week, co-creator Paul Dini tweeted today is Harley's very own 20th birthday.

Bring in the exploding cake! The poisonous pass the parcel and all the other madcap birthday treats this Gotham City Siren would enjoy (Ivy?). Sure it may be another year before she can legally drink in some countries, but the law won't wreck this girl's big day!

While her outfit has changed controversially from it's patent pending original, have you ever wondered where the zoot suit red and black riot originally came from? How about daytime soap opera Days of our Lives? Yip, insane character, insane origins. Hear Paul himself explain to writer Kevin Smith, in this Birthday bonus YouTube vid. Happy Birthday Puddin'!