DEAD OR ALIVE, YOU'RE COMING WITH ME: 5 Ways To Save The New RoboCop Suit

If the first look at the 'new' RoboCop costume below, reminded you of some bland sci-fi outfit usually given to dispensable background henchmen, rather than the lead hero or anti-hero, you are not alone. 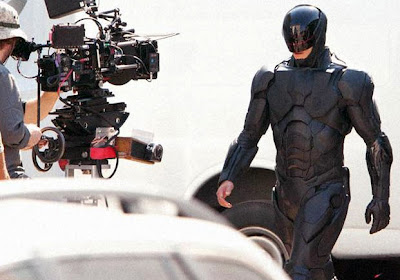 With news RoboCop receives several upgrades to his suit throughout the movie, I hope all the black is just so more can be added in post production. Still, never being one to turn away a chance to throw a five-cent opinion where it isn't called for, here are my five ways the 2013 RoboCop costume can be saved from living in obscurity;

5) Give him a cyborg dog Not like any puny Alsatian or cute endearing icon designed by the merchandising or marketing folks. Give him a panther sized partner that'll chew the face of crime and spit down it's throat. Yip, a feral canine by his side would deffinitely stop this RoboCop suit being a dog's breakfast.

4) Shadow Melt If his suit is going to be all black, dont just have him as 'Motorcycle Batman' - give it purpose! Able to become invisible and intangible in the dark city streets, RoboCop can now show criminals the shadows are no place to hide.

3) Combinable RoboCops Lead by the main man, the other less experienced Robo's in the squad can either follow the word of their commander and attack one-on-one or using the technology of their new bodies and moves no human limbs can match, combine to become one giant RoboCop ready to tackle any sized crisis!

2) Put Wolverine in it. Heck, if the new suit looks like it might effect audience numbers, there's no reason for a moderate fee, why you can't take a leaf out of Marvel's book and throw Wolverine in for a sure-fire hit of attention. Not only is Hugh Jackman a natural at the role, Logan is used to taking on 'iron men', so it's not like he needs rehearsing time!

5) Upgrade him to this 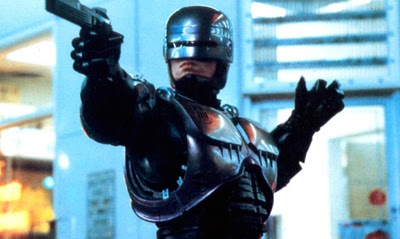 Seriously, of all the things the franchise had to offer, was the original look that broken?