IN SITH GEAR: The Star Wars Truck That Even Has Carbonite Han In The Trunk

To ensure 70% of people don't ding the back of your ride as they're sorting iTunes and driving at the same time, plaster it in Star Wars detail. That's the percent of peops who are fans of the original films, and will take to protecting your bodacious set of wheels with their lives, as they turn Jabba The Hutt green with jealousy. Case in point... 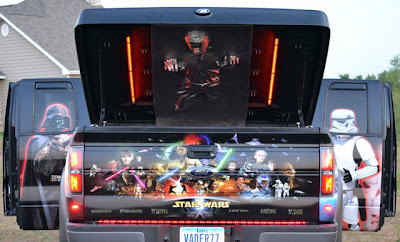 Owner Trey Laymon's Ford Raptor may have a few Jedi's on the bumper, but otherwise this portable shrine is all round pure Sith. Not only does Darth Vader appear on the left and rise out of flames on the bonnet, Han Solo is frozen in carbonite and rises when you pop the trunk! Even Boba Fett never carried him in such style. 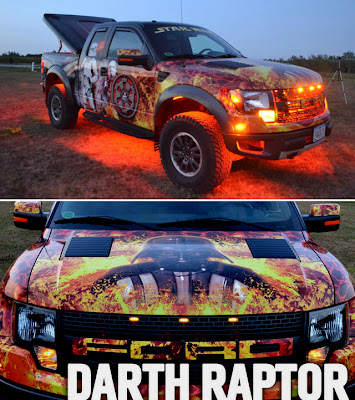 To see more photos of the Death Star on wheels, click the jump. As for the other 30% of drivers you'll still have to watch for - Trekkies. It's a fan eat fan world out there folks, just sayin'.
Posted by IADW at 11:18 am