IT'S THE RANDOM THOUGHT THAT COUNTS: Death Arrives By Mail

One of the downsides of running a blog 'down-under', is that you don't get to experience the northern hemisphere Comic Con's and marvel over the talents on display. This year, as I was moping that very thought over Chicago Comic Con, guess what surprise arrived via good old snail mail? This Jon Hughes Death 'Con sketch, from one of the most wonderful of wonder women and Chicago 'Con attendee, Random! 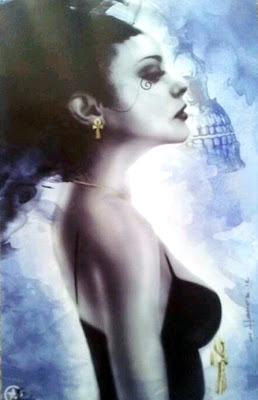 Isn't it awesome! One of our mutual fav's, both Random and I dig the job Vertigo have done over the years, making Death an upbeat yet not over-marketed character, despite her popularity and Grim Reaper-ish occupation.

Says Random; "I don't know about anyone else, but I always get a warm glow at the scenes she's in. And that piece really did do a superb job of capturing it. It's not the usual impish Death we see (who I also love) but it still gives you that sense of peace."

To see more of Jon Hughes' wicked workings, visit him on Facebook or on his own personal website after the jump. Thanks again Random!
Posted by IADW at 11:52 am