LEST WE FORGET: Have Faith In Zauriel

Despite having a first class ticket to ride, some of comics best often get left to wonder the platform aimlessly. In Lest We Forget, I pluck a limbo-lingerer from the station and pimp their reason to return. This month, the guy who literally rejected Heaven for love, Zauriel. 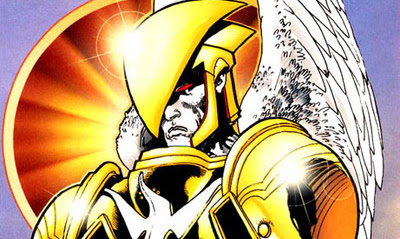 When I first read Zauriel was joining the Justice League as 'the new Hawkman', I hated him immediately. DC didn't need a new Hawkman - with a little work, the one they have is always ready to fly. Yet by the time his debut two issue arc was over, Zauriel not only landed within my top ten characters, he'd brought the forces of hell along with him, and through Aquaman, slipped in an awesome nod to Katar aswell.

A former member of Heaven's Eagle Host, as a Guardian Angel, Zauriel watched over the likes of Cleopatra and Joan of Arc. Yet it was Californian Shannon Coyne he renounced his divinity for through love, joining the Justice League in repelling Asmodel's army. 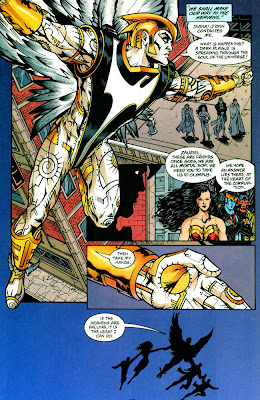 Since then he's confronted the Spectre, been rejected by his true love, granted a floating HQ over L.A., died a few times and argued for Heaven's aid as they planned for a new creation in the wake of Mageddon. Oh yeah and he's been part of the Shadowpact.

As a character, Zauriel's energetic and emotive personality made him almost a bohemian angel (one armed with a flaming sword, armour and angelic scream, but a bohemian no less). In fact he was so hip, he often took God's name in print and no one seemed to complain. Proving be you Atheist, Christian or numerous other, Zauriel is simply one heavenly creation.

HOW I’D BRING ZAURIEL BACK:  Zauriel would appear back on earth aware of Pandora and the Phantom Stranger's game, as well as their role in the current state of the DCU. Hunted by forces which would seek to silence his knowledge, Zauriel assembles his own league of mystic and heavenly bodies, ready to confront the forces trifling with mankind. Among those enlisted; Dr Fate, Jim Corrigan and Raven.
Posted by IADW at 12:36 am