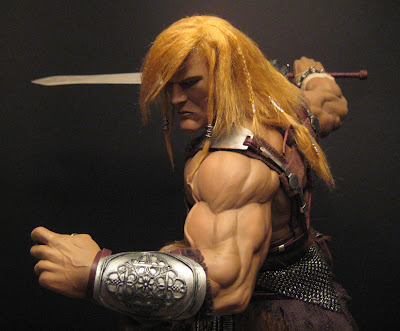 People like to make jokes in the direction of He-Man, which isn't all that wise considering the dude wields a giant sword and rides a 'battle cat' nearly everywhere he goes. Now adding another point to that 'not a laughing matter' list, is this mind blowingly 'I want one' inducing, custom-made sculpture of Eternia's greatest champion, ready to take the 'beast' out of Beast-Man and claim it as an adjective of his own.

Created by EJ Pang of America, EJ started doing smaller sculpts of characters such as Fear Agent, Nightcrawler, the current Agent version of Venom, Sinestro, Hulk and more, before moving onto this 1:4 scale sculpt of Prince Adam's infamous alter-ego. 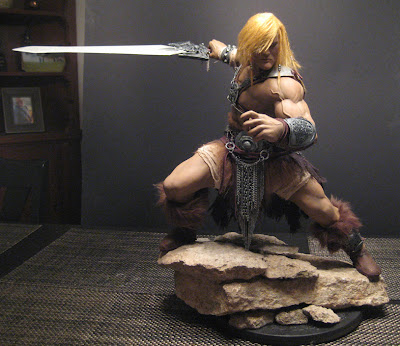 An answer to the prayers of all the MOTU fans like myself who have wanted the franchise to get a bit more of a Conan-type feel, this incredible fan effort could easily take the place of the telly in any household lounge, keeping folks just as entertained.

What do you think?  See more angles, the making of and EJ's other moulded creations in his online gallery, right after the jump.
Posted by IADW at 1:03 pm