She knows eleven ways to kick your butt at any moment and can read your mind as she does it. Now, Marvel may be about to give Psylocke her own title, according to hints CBR found from Marvel Senior Vice President of Sales David Gabriel, talking about Marvel NOW!. 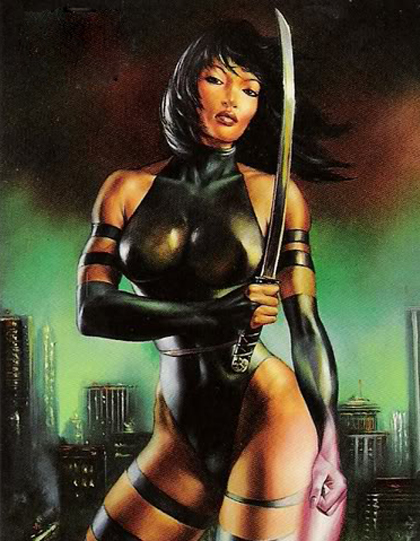 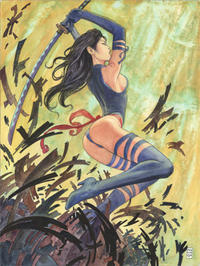 As if that wasn't enough, the follow-up comment:
"Stay tuned for some x-citing Marvel news on Monday that'll make Psylocke fans very happy."

Milo's take on Psylocke is on the left. While I hold out hopes the possible series will focus equally on her Hand/Lady Mandarin background as it does the X-props and Captain Britain ties, there is no doubt after a stellar run in Uncanny X-Force, Betsy Braddock's time has come - or make that will come - early next week. Definitely to be continued.

UPDATE: Psylocke will be the focus of a rebooted Uncanny X-Force title, picking up six months after the conclusion of the current sales hit's final moments. Joining her will be Psylocke, Storm, Puck and Spiral, with others set to jump in shortly after. Written by Sam Humphries and illustrated by Ron Garney, Uncanny X-Force #1 lands in January. (Via)
Posted by IADW at 8:47 pm