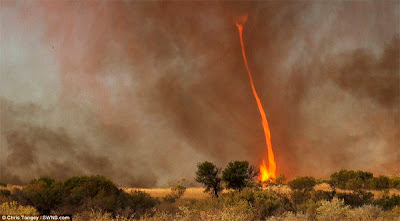 They say you don't know Darkseid's conquered your planet 'till the grounds spewing fire and your neighbour's giving birth to a Parademon. Well here in Australia, we've definitely got the first part covered. Knowing the Aussie summer is quickly approaching and looking to snap up valuable beachfront property to soak it all up from, it's only natural Darkseid tries to take over 'down-under' first. 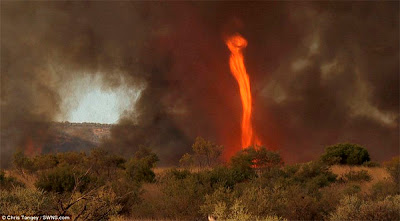 One in a series of actual Fire Tornadoes, these natural beasties (which some allege were instead created by a rouge named "Mother Nature") were luckily caught on film.

You heard it here folks. Either start saying "Darkseid is" or pack the car and head for the hills - mint condition comics and kids first.
Posted by IADW at 1:44 am